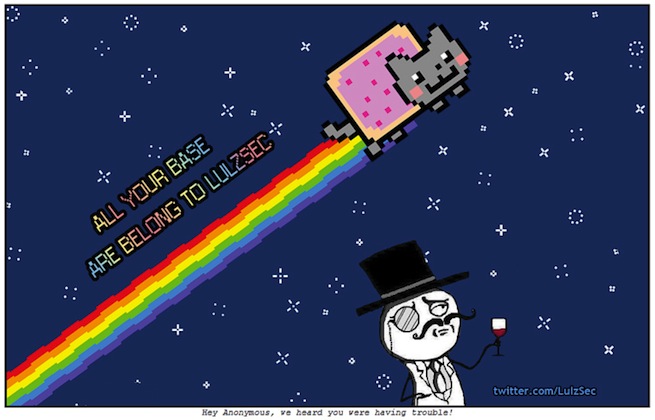 Two U.K.-based youngsters believed to be a part of the LulzSec hacking group pleaded guilty to attacking the CIA website, the U.S. Air Force Agency website controlled by the Pentagon, along with a slew of others in a U.K. court today.

Cleary, 20, pleaded guilty, along with fellow LulzSec member Jake Davis, 19, to two counts of “unauthorized act or acts with intent to impair or with recklessness as to impairing, the operation of a computer or computers” per the U.K. CyberCrime Law. That is, the two admitted to using distributed denial of service attacks to take down a number of websites including  that of the U.S. Central Intelligence Agency website. A distributed denial of service attack, or DDOS, shuts down a website by blasting packets of information in the thousands to overload the server, eventually causing the system to crash. We’ve seen hacking groups such as LulzSec and Anonymous use this tactic to take down, and occasionally deface websites.

Davis was a well-known figure around the LulzSec/Anonymous community codenamed “Topiary.” His arrest spurred a number of these attacks done for the “Free Topiary” cause. If convicted, the two face up to 25 years in jail.

Other websites mentioned in the case included Westboro Baptist Church, HBGary, and PBS. The hack on Westboro Baptist Church stirred the pot when a hacker called into a live interview with one of the church’s leaders and hacked the website on the spot. The hack of security company HBGary was also a headliner, when the group took down the site and posted 71,000 company e-mails to the Web.

Cleary and Davis, however, are both pleading not guilty to counts of stealing proprietary information during these hacks and publishing them. Other arrested members, 25-year-old Ryan Ackroyd (otherwise known as lolspoon, or Kayla) and an unnamed 17-year old, plead not guilty to DDOSing. The two will be tried in court on April 8, 2013.

Cleary was originally arrested a year ago in June 2011 for violation of the Computer Misuse Act. He was taken by the Metropolitan Police to a central London station while police searched his house, finding “a significant amount of material.” He was recently indicted by the United States for his hacking activities, though it is reported that the U.S. will wait until after the U.K. proceeding to take further action.

via The Telegraph; LulzSec image via openfly/Flickr