Virtual private networks, or VPNs for short, have emerged as key tools in the battle for online privacy. This is a battle Canada-based TunnelBear has been helping with over the past few years with a cross-platform app that shields your location and identity on the web.

Today, TunnelBear is bringing its encryption technology to Google’s Chrome browser with a new lightweight extension that lets you flip your browsing into anonymous mode in seconds. 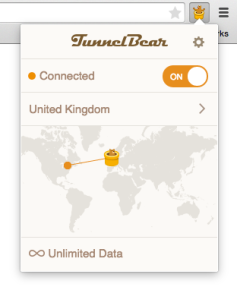 Strictly speaking, TunnelBear for Chrome isn’t a VPN, though it does offer VPN-style features. The new Chrome app is actually an encrypted proxy, which means it’s limited to activity within your browser rather than cloaking all activity on your machine — so if you want all Internet activity to be shielded, with encryption taking place when the data leaves the computer, then TunnelBear’s Windows or Mac app is what you’re after. 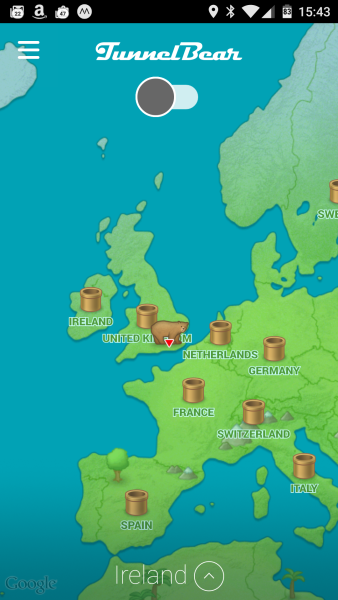 Above: TunnelBear for Android

Available for Mac, Windows, Android, and iOS, TunnelBear has gained a reputation as one of the easiest, most user-friendly VPNs, amassing north of five million users across 179 countries since its inception in 2011.

The Toronto-headquartered company now has 18 employees — mostly developers and designers — and is entirely self-funded. TunnelBear is also profitable, the company tells VentureBeat, using a simple but effective means of monetizing and marketing at the same time.

On the free plan, you receive 500MB of data per month to play with, which will get you pretty far if it’s simply emails and general Web browsing. But if you’re streaming video, then it would probably garner you around 45 minutes.

However, users can “buy” an extra 1GB worth of data simply by tweeting out a promotional message on behalf of TunnelBear.

If you’re a dedicated anonymous Internet user, you can commit to a monthly installment of $4.99 which gets you “unlimited tunnelling” on 3 devices. Or you can pay $49.99 for the year and get the same thing, while saving 17 percent off the monthly equivalent cost.

So who is using TunnelBear, and what, exactly, are they using it for?

It’s true that people use VPNs to circumvent geo-restricted content. So, someone in the U.S. or France or Zimbabwe could crank up TunnelBear to watch BBC iPlayer, an online TV catchup service normally reserved for British TV licence fee-payers. And such circumventions have caused tensions between some of the big online entertainment companies.

Last year, it emerged that Sony might just be a little hacked off with Netflix for not being tough enough on those who use VPNs from around the world to access its content, even though they still have to pay to use it.

Shortly after, reports emerged via Reddit that some VPN services no longer worked with Netflix, though Netflix denied it was doing anything different from what it normally did to crack down on people channeling in using VPNs and other similar workarounds.

Though Netflix users are only allowed to watch the content that’s available in their geographic location according to its own Terms of Use, it’s generally accepted that using VPNs isn’t illegal in itself. That said, Netflix would likely be within its rights to close an account if it suspected someone was using a VPN.

In an interview with VentureBeat, TunnelBear cofounder Ryan Dochuk says that his company has faced no external pressure or door-knocking from Hollywood or anywhere else regarding its VPN services. “We haven’t encountered any negative feedback about TunnelBear — it really hasn’t been a focus of TunnelBear,” he said. “We’ve never been contacted by any content providers.”

While he says that the company doesn’t actively monitor what TunnelBear is used for, citing feedback from the users he adds that the main use-case for TunnelBear has been privacy-related. “We also have a large number of users in censored countries which use TunnelBear to connect to services like Twitter, Facebook and YouTube,” he added.

And that is a key point here. VPNs serve as vital tools for those who live in strict regimes where access to online services are routinely blocked. Last year, for example, Turkey banned Twitter after allegations of government corruption circulated through the social network. The upshot? VPN uptake went through the roof.

TunnelBear operates in an increasingly competitive space with options aplenty to protect your location and identity online. Perhaps the most well-known VPN provider out there is Hotspot Shield, though its free version is supported by ads and it doesn’t have a browser-based version.

Then there’s ZenMate, a Berlin-based startup that has hitherto pitched its main differentiating factor as being its browser-only status — it offers VPN-like features packed into plugins for most of the main browsers.

Now that TunnelBear has a browser extension too, it offers the best of all worlds. You can have it permanently enabled in Chrome to shield your Internet activity, but then all your other PC-based online activity remains normal. This saves you from constantly having to switch VPN settings on and off. 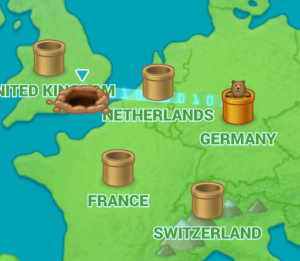 Perhaps one more factor in TunnelBear’s armory is its charming tunneling bear animations that permeate the app. Sure, some may argue that they’re gimmicky, but they are fun and perhaps serve to ease a new user into the VPN experience.

“There are plenty of VPN services out there, but they tend to be targeted at technical users,” explained Dochuk. “Our apps have always focused on just making our service fun, simple, and approachable for everyone. It’s all about unlocking the benefits of VPNs for the average person.”

Arriving for Chrome is also an easy way for TunnelBear to bring its technology to more platforms, given that the browser is available for Linux and Chromebooks. The company says that it plans to support additional browsers in the future, including Safari and Firefox.