Update, 6.17am (PT) December 21: The compromised Netflix Twitter account is now apparently under the full control of Twitter again, with all rogue tweets removed. The hack lasted around 40 minutes. You can read the original article below.

Netflix’s U.S. Twitter account has been compromised by a hacker claiming to be from the notorious hacking group OurMine.

The video-streaming giant’s Twitter account sent out this message at 05:29 (PT), and although Netflix apparently regained control of its account and deleted the message, a further series of tweets seemed to confirm that OurMine was back in control of the Twitter feed. 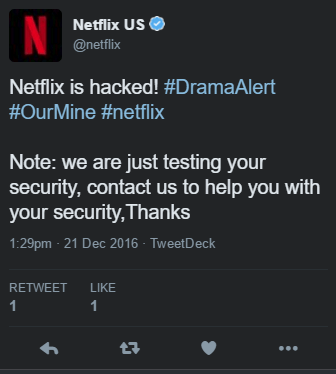 Shortly after the original OurMine tweet, both Netflix and its “NetflixHelps” Twitter accounts suggested that everything was in order.

Above: Netflix: Back in control? 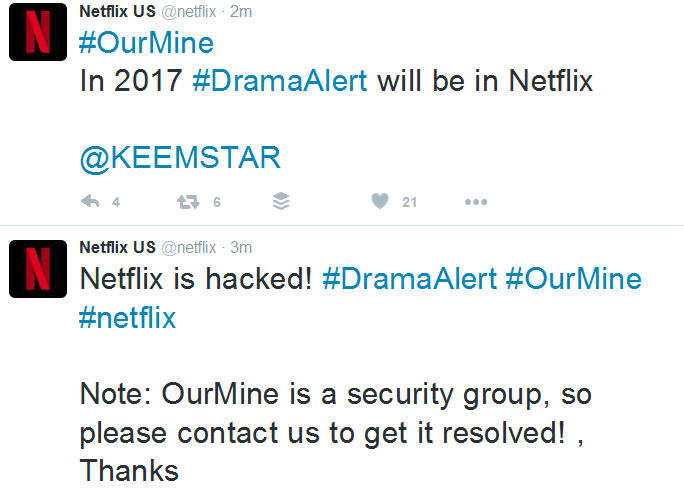 For the uninitiated, OurMine has a track record of infiltrating online accounts pertaining to well-known people and brands. Back in June, Facebook cofounder and CEO Mark Zuckerberg’s Twitter and Pinterest accounts were seemingly accessed by OurMine, as were accounts belonging to Google CEO Sundar Pichai. The following month, Twitter cofounder and CEO Jack Dorsey also had his Twitter account accessed by OurMine.

Back in October, a BuzzFeed report claimed that the hacks were carried out by a Saudi Arabian student going by the name of Ahmad Makki. OurMine denied this rumor, and BuzzFeed itself was subsequently hacked, with a number of its headlines altered.

The direct impact of OurMine’s myriad hacks generally hasn’t been too serious and, in an interview with Mic earlier this year, the collective claimed it carried out hacks to “encourage” people to improve their security habits and to buy consulting services directly from OurMine.

The latest hack only seems to have impacted Netflix’s main @Netflix Twitter account, which is focused on U.S. viewers. Other regional accounts, including the U.K., are fine for now.