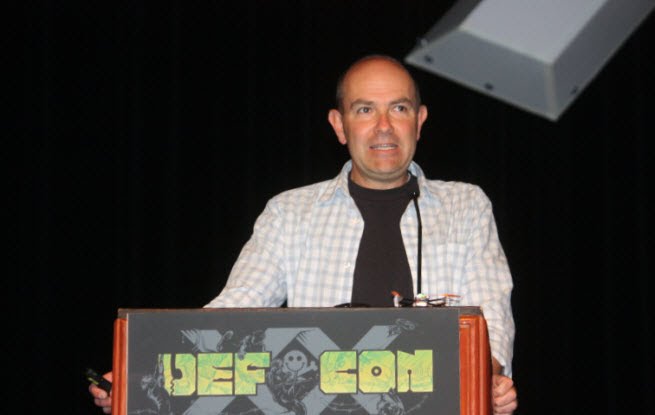 The do-it-yourself (DIY), open-source drone movement is turning into a real business that could disrupt the commercial and military drone industry. It’s another case of how exploiting the curiosity of hackers can turn into a commercial opportunity.

That’s the view of Chris Anderson (pictured), editor of Wired magazine and a drone hobbyist and businessman on the side. He spoke about this DIY trend and his own efforts to lead it in a talk at the Defcon hacker conference in Las Vegas today.

Anderson said the whole project is “open sourcing the military industrial complex.” Drones have been the domain of the U.S. military, which has created huge awareness about drones such as the Predator and the Reaper by using them against terrorist targets in a variety of areas where troops can’t go. Those drones cost millions of dollars, but the DIY drone business is focused on created ubiquitous drones that cost tens of dollars.

Anderson’s interest started five years ago as he sought ways to get his kids interested in science. He got them to make robots with Lego Mindstorms robot kits, but their interest didn’t last. Then he tried to get them to fly a remote-controlled airplane, which ended up stuck in a tree. The kids lost interest. But the idea of combining the DIY nature of the robot and the airplane sent Anderson “straight down the rabbit hole,” he said. Then he created the first Lego unmanned aerial vehicle (UAV), or drone.

His interest in drones led to a web site called DIY Drones, which has blossomed into a community of 30,000 registered members. The site gets 1.4 million page views a month, has 6,000 blog posts, 8,000 discussion threads, and 80,000 comments a year. Anderson has marshaled that community to create open-source software for all sorts of drones. And Anderson co-founded a for-profit company, 3D Robotics, (with a 19-year-old Mexican teen) that creates computing hardware for drones. That hardware itself is built on the Arduino open-source computing platform. The DIY software helps hobbyists create a wide variety of drones, like a drone you can fly with a Wii game console controller.

That hardware can be used to build all sorts of drones, such as “quad copter” drones based on the hardware of the Parrot AR Drone. The Parrot drones are controlled by humans, but the 3D Robotics hardware converts them so they can be completely autonomous, fulfilling the definition of a drone.

3D Robotics sells the drone hardware for $199 or so, enabling community members to take their software and run it on a hardware platform and thereby field their own flying drones.

“Anything that is remote-controlled, you just put this in there and suddenly you’ve got a drone,” Anderson said.

There are some legal issues around drones and whether they can be flown in commercial airspace, but Anderson said he has a legal opinion from lawyers that the business is legal, since the DIY drones are so far used for non-commercial purposes.

The drones have gotten quite creative. You can go surfing and have a drone take off from the beach, fly over you, turn on its camera and then film you from above as you surf.

The hardware is priced at about 2.6 times the hardware bill-of-material cost, allowing a 40 percent margin for retailers and a 40-percent margin for the company. But since the software is free, the end product can be quite cost efficient compared to competitors who have to try to keep pace with an all-volunteer software community, Anderson said. That means that Chinese knock-off rivals can copy the hardware but will have a tough time keeping up with 3D Robotics as it launches new software-driven varieties. Right now, the company offers 150 different products, including 75 from the community.

“They can’t clone our community,” he said.

The company has two factories and 50 employees now. In addition, 3D Robotics rewards its community contributors with T-shirts, coffee mugs, free travel, free hardware, and — if they contribute enough — equity in the company. All of the drones are under $1,000. Competitors include other open-source DIY communities where the model is similar: charge for hardware, give away the bits.

Drones still have a lot of room to improve before they become mainstream toys for more consumers, especially those who would never pick up a soldering iron to assemble a product.

“In two years, we have begun disrupting a multimillion-dollar industry with the open-source model,” Anderson said. “We can deliver 90 percent of the performance of military drones at 1 percent of the price.”

Of course, at least so far, the hackers aren’t “weaponizing” the drones.