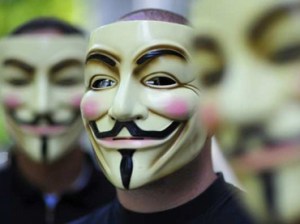 Stratfor, an organization that provides international intelligence reports to a large (and often influential) clientele, has finally brought its site back online after last month’s Anonymous-driven takedown.

Anonymous, a hacktivist collective, opened fire on the site for reasons unknown. The group gained access to and then published contact and financial information for hundreds of thousands of Stratfor subscribers.

“In the global commons, anonymity is an option,” said Stratfor CEO George Friedman in a statement this morning.

“This is one of the great virtues of the Internet. It is also a terrible weakness. It is possible to commit crimes on the Internet anonymously. The technology that enables the Internet also undermines accountability. Given the profusion of technical knowledge, the integrity of the commons is in the hands of people whose identities we don’t know, whose motives we don’t understand, and whose ability to cause harm is substantial.”

Friedman also recorded a video about the attack and subsequent downtime:

Stratfor announced last month that it had been hacked on December 24, 2011 and that member data had been illegally stolen and exposed.

The company delayed relaunching its website “until a thorough review and adjustment by outside experts [could] be completed,” a Stratfor rep told VentureBeat in an email at the time.

Then, on December 30, Anonymous dumped a huge amount of sensitive data on text-storage site Pastebin. The data dump inlcuded 200GB of names, email addresses and unencrypted passwords for around 860,000 Stratfor users as well as unencrypted credit card numbers for 75,000 paying Stratfor subscribers.

“We knew our reputation would be damaged by the revelation, all the more so because we had not encrypted the credit card files,” said Friedman today. “As the founder and CEO of Stratfor, I take responsibility for this failure.”

Today, Stratfor has finally brought its site back online and is working to scale back up after several weeks of downtime.

Verizon and the FBI continue to investigate the forensics of the attack.

“It was deliberate destruction,” Friedman said to Reuters. “Their only motivation in doing that was to silence us. We don’t know why they wanted to silence us.”

All along, we’ve wondered exactly why Anonymous went after Stratfor, which claims to provide neutral intelligence, analysis and forecasts on matters of international security, politics and more.

In a statement issued December 29, representatives of the Anonymous movement wrote, “All our lives we have been robbed blindly and brutalized by corrupted politicians, establishmentarians and government agencies sex shops, and now it’s time to take it back.”

“The consequence of this will not be a glorious anarchy in the spirit of Guy Fawkes, but rather a massive repression,” Friedman countered. “I think this is a pity. That’s why I wonder who the hackers actually are and what cause they serve. I am curious as to whether they realize the whirlwind they are sowing, and whether they, in fact, are trying to generate the repression they say they oppose.”