Actress Evangeline Lilly narrates the newest effort by Fight for the Future and Demand Progress to wake up the American public to what those organizations say is illegal surveillance by the NSA and other organizations with programs like Prism, XKeyscore, and more.

“The U.S. government is secretly tracking the emails, purchases, text messages, location, and phone calls of people all over the world,” she says in the video. “Under this system the government can know where you’ve been, where you are, and where you’re going.”

“The president, the NSA, and their lawyers have tried to deflect public outrage by distorting the facts and misleading the public about the process,” Lilly says.

The video was released in preparation for a planned protest in Washington D.C. on the anniversary of the U.S. Patriot Act — the legislation that is used as justification by the government for the NSA’s activities. Organizations like Restore the Fourth, however, say that unwarranted government spying violates the highest law of the land, the Constitution. 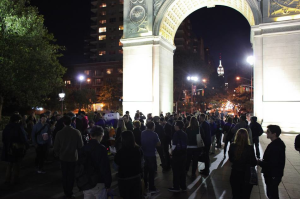 Above: Supporters gather to watch the video in New York.

The goal is to reach a larger audience than the typical anti-government, freedom-loving crowd, and the video cleverly uses excerpts from well-known pop culture movies such as The Big Lebowski, E.T., and Ferris Bueller’s Day Off to make what could be an esoteric and confusing subject seem more relatable. And it starts with what movie aficionados might recognize as the homicidal computer system HAL from the movie 2001: A Space Odyssey.

(I wonder if the makers got permission from copyright holders for that.)

“The NSA was hoping they could wait out the public’s attention by using esoteric buzzword-y jargon and trying to obfuscate the full scope of its nefarious dealings,” David Segal, executive director of Demand Progress said in a statement. “But that’s not what’s happening. Instead, the more people find out, the more upset they are. We made this video to give those people a weapon to educate and inspire others, pointing towards the Stop Watching Us rally in Washington, DC. on October 26th.”

Fight for the Future’s previous video on SOPA/PIPA achieved more than seven million views online. Those who love freedom and privacy, and are concerned about the NSA’s activities, would probably like to see this video reach many more.