Twenty years ago, the average person likely owned a single camera, and security cameras inside homes were nearly as rare as they were in cars. But as we enter the 2020s, cameras have become ubiquitous. Most people today have two or more cameras on each smartphone, one or two in each computer and tablet, and at least one — a backup camera — in their car. They may also have doorbell cameras to watch for visitors and package theft or Nest Cams to provide further indoor or outdoor home security. Once you include dash cams and the multiple safety cameras used by cars and VR headsets, it’s clear almost any place can now be “seen” in near real time, a development that some find unsettling.

It’s one thing to have cameras everywhere, but it’s entirely another for their footage to be effectively monitored. AI has emerged as the key to turning unfathomable quantities of raw camera footage into actionable data for users — and potentially companies or governments. Individuals now rely on computer vision AI to automatically identify friends in their photo libraries, alert them when people are approaching their front door, and warn them if their car drifts out of lane. But variants on the same AI now enable the police to track people across multiple “neighborhood watch” doorbell cameras that are linked together, and even use your friend’s identified face across aggregated searches of multiple users’ photo albums.

Larger concerns focus on where the footage goes — and who’s watching. Cameras such as Amazon’s Ring and Google’s Nest send footage to cloud servers for processing. Beyond combining users’ doorbell cam footage for neighborhood watch purposes, Amazon has admitted that employees screened some customer videos without permission, a breach of privacy that likely happens more often than people realize.

Thanks to on-device edge AI processing, security cameras are evolving. At this year’s CES, Abode revealed a doorbell camera that can learn to recognize “authorized” and “unauthorized” users by face, treating strangers differently from known visitors or residents. The camera builds its own identity database, alerting users when strangers approach or triggering warm welcomes for approved visitors. Sensing potential blowback over facial recognition implications, Abode made the feature opt-in, but it’s hard to imagine anyone opting out of the product’s tentpole feature. 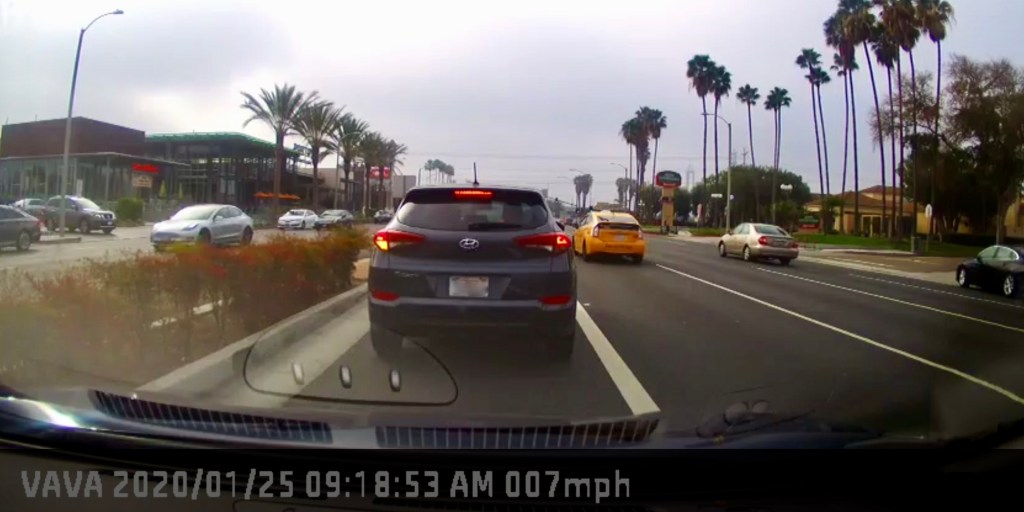 Above: A new 4K Dash Cam by Vava enables you to record what’s going on outside or inside your car in UHD resolution.

Cars are the next frontier for this sort of camera surveillance. While Tesla added exterior cameras largely to help its vehicles avoid accidents, the cameras are increasingly being used in sentry mode to alert owners when their cars are hit or broken into. And aftermarket options abound. Vava sells a 4K Dash Cam with a “parking monitor” mode that triggers recording if it’s jostled. It can also be spun around to an interior view to let users record car karaoke sessions in Ultra HD resolution. Full audio is captured inside the vehicle at all times, unless that’s toggled off in Vava’s app.

The appeal of such solutions for security alone isn’t surprising — everyone would prefer to have photographic evidence of the person responsible for damages. But are we truly ready to turn our cars into recording studios?

Above: Vava’s 4K dash camera can be rotated to record whatever’s happening inside your vehicle, a feature it says can be used for car karaoke sessions.

Two major developments will dramatically up the ante for automotive surveillance over the next few years. First, manufacturers will be integrating cameras directly into cars’ interiors. Second, vehicles will increasingly arrive with persistent wireless connections — including some models previewed at CES 2020.

Like the other aforementioned camera innovations, in-car cameras have positive potential. They may enable faster emergency assistance after accidents, let drivers or passengers chat by video without fidgeting with their phones, and help parents monitor what kids in the back seat are getting up to. Some cars already have systems to detect driver inattentiveness, and Audi is testing eye-tracking cameras that enable drivers to see a 3D heads-up display (HUD).

Above: Aftermarket car dash cams with GPS already record your vehicle’s location at any given second. Location accuracy will increase to centimeter-level detail in the 5G era.

Conspiracy theorists might conclude that the proliferation of cameras, 5G, and AI will lead to everything being monitored — massive amounts of car camera and sensor data automatically uploading to the cloud over persistent, high-bandwidth 5G wireless data connections, with advanced AI canvassing and sorting personal footage for who knows what purposes. But realistically, the cost of surveilling everything at scale would be inconceivable; each two-minute 4K clip from a single Vava camera consumes 600MB of data, enough to require high-bandwidth SD memory cards. Governments will struggle to corral data from hundreds of thousands of connected cars to achieve their stated public safety intentions, let alone harnessing a deluge of data for more nefarious purposes.

As AI gets better at automatically sorting wheat from chaff and network bandwidth increases to enable even larger quantities of video to pour into cloud servers from multiple sources at once, the risks to individual security will increase. Moreover, cloud servers may be able to efficiently process content from more users and homes as “edge” processing of video and photos increases — assuming users keep sending their personal content to Google’s cloud and sharing their “neighborhood watch” doorbell videos with Amazon.

Above: Armed with a memory card and on-device AI, Anker’s Eufy Doorbell Camera can record every person who approaches your home without sending video to cloud servers.

Car companies and the chipmakers that support them are already talking about harvesting data from network-connected vehicles. Qualcomm recently noted that its Car-to-Cloud platform will enable automakers to leverage post-purchase vehicle usage insights from factory-installed sensors and services in order to sell additional unlockable features to customers. It’s unclear at this point what data automakers will be looking at, but we’re probably not far from seeing customers receive “added safety package” pitches after their cars determine they’re not paying enough attention while driving.

The potential safety and security benefits of home and automotive cameras are clearer today than ever before. Under the right circumstances, AI-powered home cameras can protect against intruders, keep packages from being stolen, and give parents peace of mind. Similarly, car cameras will increasingly let people monitor and protect some of their most valuable assets — vehicular and human — wherever they may be.

Going forward, however, buyers of both home surveillance cameras and camera-equipped cars should study the cameras’ monitoring and sharing disclosures carefully. AI will allow cameras to go beyond merely watching us all the time, adding the potential to analyze and share footage more widely than we might want. It will be up to us to say no, lest some of our most private moments quietly stream outward to cloud servers and unknown viewers.