NSA-grade security is now coming to an Android device near you.

Virtru, a Washington, D.C.-based encryption startup that former NSA spook Will Ackerly cofounded, has released its Android version of its popular crypto platform, on the same day, of course, as the first anniversary of the Edward Snowden scandal that is still reverberating around the globe.

Using the Trusted Data Format that Ackerly created, and later adapted by the U.S. intelligence community to safeguard data, Virtru uses AES 256-bit encryption keys for both email sender and receiver. Ackerly said Virtru’s encryption is nearly impossible to crack, even by hackers at his previous employer. 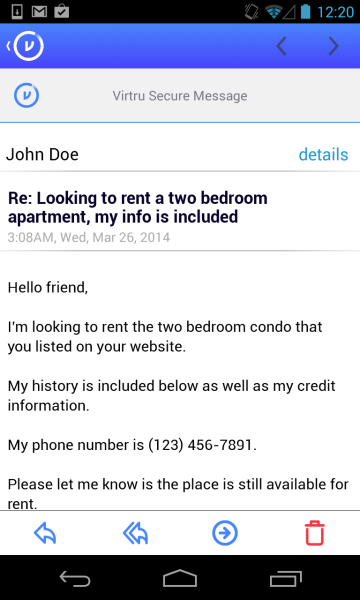 “There are many more possible keys than atoms in the universe,” Ackerly said. “AES 256 is used by the U.S. military and the intelligence community to protect its data in transport.

“At the very least, it’s as good as anything the intelligence community is using.”

One of the biggest hurdles for widespread adoption in the private sector is that encryption is perceived to cause friction between users — that is, an added layer on top of sending and receiving. With that in mind, Vitru has managed to keep friction to a minimum.

Less than six months old, Vitru has over 25,000 client and received a 5-star rating on Google’s Chrome Web Store. Virtru was first launched with Webmail and then later iOS. Building the app for Android makes total sense since it surpasses iOS in user numbers.

Virtru’s Android encryption enables users to control access to email messages and files and can be “revoked” at any time. Users can also set expiration dates for sensitive email. The beauty of Virtru means it can be installed in about a minute and doesn’t require new passwords.

The startup, launched in January, is based in downtown Washington, D.C., close to many who inhabit the political, intelligence, nonprofit, and private sector landscape. Most of Virtru’s 12 employees have NSA backgrounds, as do the 13 contractors it works with.

With privacy in mind in an age of communication intercepts and double-dealing, Vitru doesn’t store or have access to the actual content contained in the message body. Passwords are secured directly to your device and not upstairs in the cloud, which is where users lose control of the data.

With Android, Virtru’s solution is now cross-platform, working with iOS, Android, whether using Gmail, Outlook or Yahoo mail, for example. New features mean you can respond to email chains with opt-out protocols to people you don’t want reading it.

“Android,” Ackerly said, “is critical for us.”