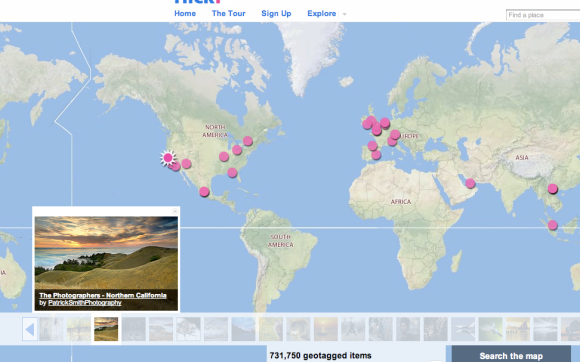 I’ve said it before, and I’ll say it again: Location, location, location. As in, it’s going to be a big part of what we do on the web going forward. We’re seeing some of the big companies now get into it, like Google with its new Latitude service. And Yahoo’s Flickr service, which geotags photos so you have a record of where they were taken, is exploding — to the tune of 100,868,302 as of its last count this weekend,  according to the service’s Flickr Developer Blog.

That’s over 100 million photos geotagged in the two and a half years since Flickr started offering that feature. For comparison, it took Flickr over two years to get 100 million pictures total after it first launched in 2004.

This 100 million number is even more impressive when you consider that most people still don’t have cameras that automatically geotag images, which means that a lot of people out there are doing it manually. But that will change in the future as more cameras gain GPS chips and as more people use their cellphones with GPS chips (like the iPhone) as their primary point-and-shoot cameras.

Apple recently unveiled its new iPhoto ’09 software, which has a geotagging component that syncs with Flickr to make it easier than ever.

Flickr notes that about two-thirds of its geotagged photos are public photos searchable by anyone, while the other third are private. You can find some of the most interesting ones by visiting this page and clicking on the pink dots icon in the upper right hand corner.