The prognostications for the iPhone have gone from bearish to bullish in a hurry. Piper Jaffray analyst Gene Munster today is reiterating the prediction made in June 2007 that Apple would sell 45 million iPhones in 2009.

Aside from throwing out the lofty number once again, Munster lays out the rationale behind his thinking today. He believes that Apple will:

Munster’s data charts (below) are even more interesting. Using the sales trends that were seen with the iPod, he extrapolates out numbers that show a massive surge in sales starting at the end of this year and continuing well into 2009. 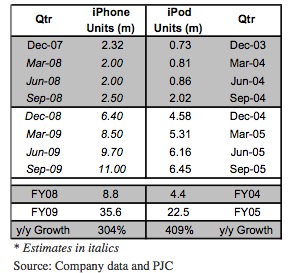 His numbers are even more optimistic for potential subscriptions in other parts of the world. The most staggering number is in China, where he expects Apple to launch the device in 2009 and potentially sign up tens of millions of new subscribers by the end of that year. 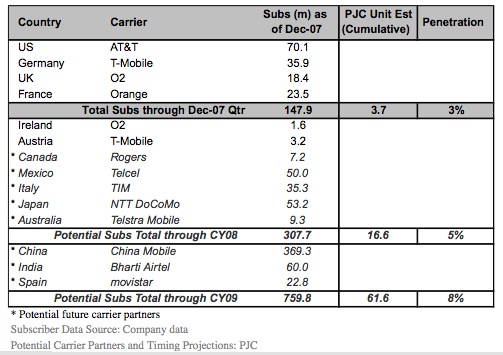 All of these numbers are contingent on a lot of variables (such as Apple negotiating a deal with China), but whereas other analysts grew skeptical about the iPhone’s sales potential, Munster has remained confident about the device. Earlier this month he stated his belief that the iPhone would outsell its 10 million goal by nearly 30 percent in 2008.

While we’ve shared Munster’s optimism for the iPhone even when the naysayers were out in full force last month, these latest goals do seem a bit excessive given the uncertainty in the new markets. You have to wonder at some point if Munster is putting huge numbers out there to justify his company’s long-standing $250 price target on Apple’s stock. This target looked good when the stock was at $200-a-share at the end of last year, but with the stock now lingering in the $140-a-share level, such an ascension might be difficult in the current economic climate.