Who says you can’t teach an old dog new tricks, Warren Buffet joked after he sent his very first tweet in May 2013. Since then he’s gained 541,905 followers with just two lonely little tweets.

A slim 32 percent of Fortune 500 CEOs have at least one account on a social network, according to a new study by CEO.com. But a massive 68 percent of the grey-haired men and women we call boss have no social presence whatsoever.

In fact, of the 500 leaders of the biggest companies in America, Just 28 are on Twitter. A few more, 38, are on Facebook. And five lonely CEOs frequent the circles on Google+.

There is one exception, however, to the apparent unwritten no-social rule for top executives: LinkedIn.

“LinkedIn remains the one social media platform that is actually more popular with CEOs than the general public,” the CEO.com study says. 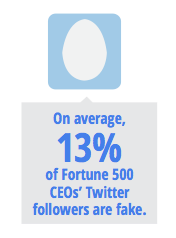 This year, almost a third of Fortune 500 CEOs have a LinkedIn account. 27.9 percent of them — 140 in total — have posted a profile on LinkedIn, up from 25.9 percent last year. That’s higher than Americans in general, about 20 percent of whom are active on the career-focused social site. In all, 140 of the top CEOs in America are on LinkedIn, and 25 of them have more than 500 connections.

It’s a little surprising that more CEOs don’t establish social profiles. While Warren Buffet’s astonishing acquired-followers-per-tweet rate is a ridiculous 270,000+ and won’t be duplicated soon, Fortune 500 CEOs gain followers almost 20 times faster than average Twitter users — over 200 times faster if you include Buffet’s massive stats. That kind of following and that kind of attention can have a significant positive impact on a company.

Most CEOs, however, save it for LinkedIn.

HP CEO Meg Whitman has almost 220,000 followers on the site. GE chief executive Jeff Immelt has 40,000, and Jamie Dimon, CEO of JPMorgan Chase, has almost 130,000. That means that CEOs are among the most powerful influencers on LinkedIn.

As far as Facebook goes, there’s one CEO who stands out, and it’s no surprise.

Facebook CEO Mark Zuckerberg is the runaway winner with 16,742,263 followers. Like Google CEO Larry Page, who is in 6,363,808 circles on Google+, Zuckerberg rules his own nest. But CEO participation on Facebook is stagnant, up to just 7.6 percent this year from 7 percent last year.