Use of every major social media site by adults went up in 2013.

The Pew Research Center Internet Project released the results of its 2013 social media report today which found that 73% of online adults use a social networking site of some kind, and 42% of adults use multiple sites. 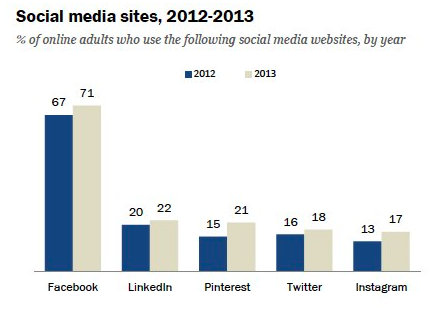 Facebook is popular across a diverse range of demographic groups, while Pew found that other sites attract a more specific set of users.

Women are four times as likely as men to be Pinterest users, LinkedIn is particularly popular among college graduates and Internet users with higher household incomes, and Twitter and Instagram are primarily patronized by younger adults, urban residents, and non-whites. Twitter and Instagram’s user bases significantly overlap.

The study also measured engagement across these sites. 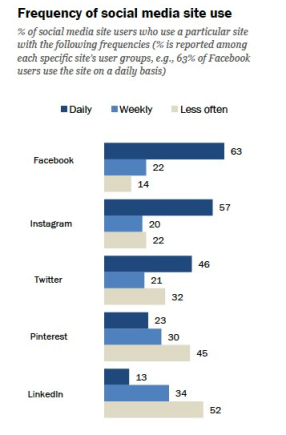 Facebook has the highest levels — 63% of people visit the site at least once a day. Interestingly,  Instagram users are nearly as likely as Facebook users to check in to the site on a daily basis — 57% of Instagrammers visit the site once a day. 46% of Twitter users are daily visitors, while Pinterest and LinkedIn users have more intermittent usage.

The Pew Center report underscores the integral role Facebook plays in our lives. However while adult usage is up, it is interesting to note the reverse migration. Facebook usage did not grow at all among teens in 2013, and is seeing lower engagement among younger users.

As moms, dads, aunts, uncles, and even grandparents get Facebook accounts, teens are predictably running for the hills. A recent report into social media usage by 16-18 year olds in the EU found that Facebook is “dead and buried” and teens are “embarrassed” to be associated with it.

This is an exaggeration, as teens are still using Facebook in droves. However Facebook’s decreasing “cool” factor has caused them to conduct much of their social networking elsewhere, through Snapchat, Twitter, and Instagram (which is, granted, owned by Facebook).

The results in the report are based on data from telephone interviews conducted by Princeton Survey Research Associates International from August 7 to September 16 2013, from a sample of 1,801 adults aged 18 and older.