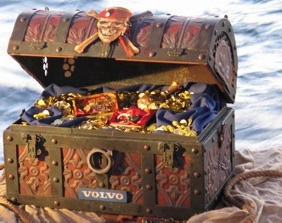 Between my computer and my iPhone, I use Google Maps to find just about everything these days. Still, I never thought about using it to find buried treasure — but Nathan Smith did.

The 39-year-old musician supposedly used Google Maps to help find a buried treasure along the Texas Gulf coast, according to the Houston Chronicle. That’s what he said yesterday to the court that is investigating his claim to the find, which may include a boat lost in 1822 during a hurricane that was filled with silver and gold.

That, in and of itself would be a great story, but that’s hardly the most interesting part. First of all, Smith, who also makes documentaries about conspiracy theories surround the terrorist attacks of 9/11, says he hasn’t made a profit from his artistic endeavors since 1990. Instead, he looks for investors to fund his treasure hunting, which in turn fund his life as an artist.

Second, he got the idea to become a treasure hunter after seeing the movie National Treasure.

Third, Smith says that half of the crew died in the shipwreck, while the other half were eaten by the local cannibal tribe.

Fourth, Smith estimates that there is $3 billion in buried treasure in the spot that he’s trying to claim.

I bet you didn’t think finding a buried treasure on Google Maps would be the normal part of the story. But something tells me Smith is just trying to get the plot optioned for National Treasure 3.