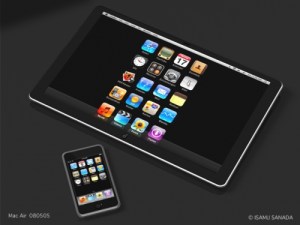 Here’s an Apple rumor that is sure to blow all other pre-Macworld rumors out of the water: A large-form iPod touch is in the works, sources tell TechCrunch. The device will supposedly have a 7 or 9 inch screen and is slated to launch in the fall of next year, the sources say.

But let’s call this device what is really is: A Mac Tablet. And if that’s the case, this rumor isn’t anything new, but what’s new is that TechCrunch is saying it has three independent sources close to Apple confirming the device and it claims that one of them has actually held the thing. What’s also new is a stated launch window of Fall 2009, but as TechCrunch alludes to, that’s just the current plan, and as with all things Apple, that can change on a whim.

It’s definitely worth noting that TechCrunch is working on its own tablet mobile computing device. Perhaps contacts the site has made in that endeavor led to this revelation. TechCrunch’s Mike Arrington declined to comment on that speculation.

While many are focused on a netbook offering from Apple in 2009, I think a tablet device or large form iPod touch makes more sense. A netbook is all about offering a cheap and portable computing experience, but Apple has proven time and time again that it cares more about quality than cheapness. This tablet computer would almost certainly not be cheap, but it would offer a nice product offering in between the iPhone (which basically is a computer but is too small to fully use as one) and the MacBook Air (Apple’s smallest, traditional laptop).

We’re heading into a world of mobile computing that will be centered around touch (and more specifically, multi-touch), and with such a product, Apple could be leading the way again. The App Store has been a runaway success for Apple, and I suspect they will roll it out to other product lines eventually, this tablet could be the first.