For many of us, our lives are an endless feedback loop, punctuated by clicks and likes.

Repeat until the nursing home takes away your device.

The fact is, our social networks, like free-to-play games, are designed to stimulate our nervous systems, sucking us into ever-increasing levels of engagement. The more you click, the more time you spend in their apps, the more these businesses succeed.

And over the past few years, these businesses have gotten very, very good at this. The average American spends 40 minutes a day on Facebook. That’s 243 hours per year.

I don’t think many people would argue that all that time is making us smarter.

A new startup, Kifi, wants to create a different dynamic, using the design and social media techniques that other apps have honed not to make you click on the latest memes, but to help you find more useful knowledge. Its goal is, as the founders put it, “to connect you with the things that you should know, based on who you are.” 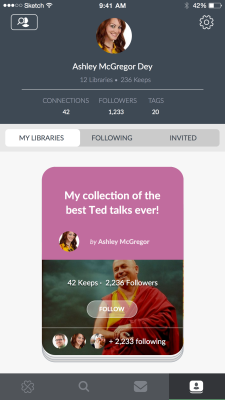 Above: Kifi lets you save web pages into topical libraries, then recommends related content from others’ libraries.

Kifi is, at first glance, a fancy bookmark manager. Using the site, its browser plug-in, or its apps (for iOS and Android) you can save links to web pages you like, dropping them into topical “libraries” if you want to organize them, or just dropping them all into a single generic library if you prefer. Those libraries can be shared, or private, as you prefer. A new feature lets Kifi capture all the links you post on Twitter, which will appeal to those of you with an archival bent.

We’ve seen a lot of such tools for collecting and sharing interesting things, from (in order of decreasing minimalism) Delicious to Pinboard to Pinterest to Polyvore.

Here’s where Kifi diverges from most bookmark managers, though. Behind the scenes at Kifi is an artificial intelligence system that the company calls “Cortex,” aimed at creating meaningful connections between individuals and their interests — building a “social network for knowledge.” In my tests of the app and website, it shows much promise. It’s well-designed, responsive, and engaging.

But it’s the founders’ vision that stands out the most to me.

“I don’t want to bring my kids up this way,” he adds. Cofounder Eishay Smith also brings up his children when discussing Kifi’s vision.

Instead, they want to build a “social network for knowledge.” Their investor presentation actually refers to building a “hive mind,” a rather grandiose science fiction-y term. In short, they’re aiming a lot higher than bookmarks.

When you visit the Kifi site, or use its app, it suggests a stream of content you’re likely to find relevant, based on which people and which libraries you’re following. But unlike Twitter or Facebook, you don’t get a huge feed of items: Kifi limits itself to showing you only the updates it believes you’re most interested in. On the mobile app, that’s just one “card” at a time. It actively slows you down from obsessively swiping up to see more, more, more. 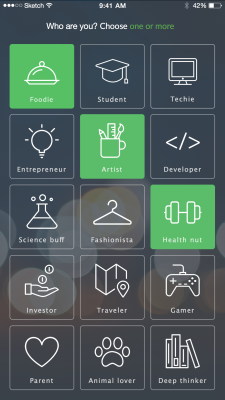 Above: Kifi’s setup screen asks you to choose “who you are,” not what you are interested in.

The distinction is a little subtle, but it gets at the profundity of what Kifi is trying to do, which is give people a deeper, more meaningful way to connect based on their fundamental identities, not their transient interests. It’s aspirational. I found it to be a good way to discover longer, less newsy articles to read — similar to the way I use Instapaper or LongReads.

That’s not to say that Kifi avoids the kind of techniques used by other social media. For instance, there’s a bit of a viral loop in that relevant libraries get shown to people who are interested in that kind of content, which means people wind up clicking on and saving those URLs themselves, which pushes the original library further up in recommendations, and so on.

For some reason, a library I’m curating on “writing well” now has over 2,000 followers — apparently there are a lot of people on Kifi interested in writing. One by Kifi VP of product Mark Yoshitake on “true happiness and living well” has over 4,000 followers.

Other libraries can attract solid SEO, because, as Blumenfeld says, they’re essentially “curated search results.” For example, the first Google result on a search for “Danny Blumenfeld” is not his LinkedIn profile, but his Kifi list of useful stuff for a startup CEO.

The founders tell me that Kifi’s algorithm can shift its recommendations over time. If you start planning a European vacation, saving links into a “Europe” library, Kifi’s algorithms can pick up on that interest and present more Europe-related links, then return to your baseline interests when you’re done planning. In my tests, that aspect of Kifi’s adaptability wasn’t immediately obvious — it is better at responding to my enduring interests rather than my latest temporary obsessions.

With the browser plugin, it can also insert related results from Kifi on top of Google search results. (Evernote has a similar feature with its browser plugin.)

The next challenge: Scale

Kifi is still very small, with only about 16 employees. It has a bit fewer than 40,000 users, who have collectively saved over 2 million “keeps,” or websites. It’s adding between 1,000 and 1,500 users a day. But it’s raised an impressive $11 million to date, with a $1 million seed round from Oren Zeev (a little-known but very successful angel who also made very early investments into Houzz and Chegg) and a $10 million A round led by Chicago-based Wicklow Capital.

Kifi’s technology has been quietly in development for over two years. Smith speaks with a huge amount of confidence about the technology’s ability to scale, despite the fact that it’s enormously computationally intensive. It helps that he’s assembled a stellar team of engineers and Ph.D.s. And Smith himself is the former director of engineering for Wealthfront, while Blumenfeld is the former chief marketing officer for Pageonce (which was sold to Intuit).

Can Kifi can live up to its promises, grow its user base, and keep the site performing as it grows?

I think it’s off to a great start. Kifi’s design, and its algorithms, are designed for long-term relevance, not newsworthiness. It’s a good place to discover advice on VC fundraising, parenting tips, baking recipes, and articles on technology marketing — but not the latest news.

That can be a very good thing. For example, when the rest of the social media world was flipping out about #TheDress, this viral topic barely made a dent on Kifi. The few articles that Kifi users did share about #TheDress, Kifi tells me, had more to do with the science and optics behind the phenomenon — not the craziness of the dress sharing itself.

So if you’re looking for a refuge from the meme-soaked madness that is the Internet we’ve built, Kifi is worth a look.