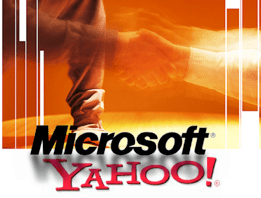 Updated with a quote from Levinsohn below.

Stop me if you’ve heard this one: There’s a report out there that Microsoft is in talks with Yahoo. The report, by the UK-based Times Online, claims that Microsoft is once again trying to acquire just Yahoo’s search business. The price? $20 billion.

If you’ve read any tech news in the past year, you’ve undoubtedly heard this all before — several times — but this new report also comes with a fascinating amount of detail.

Apparently, Microsoft is backing a new management team at Yahoo that may or may not include Jonathan Miller, the former chief executive of AOL, and Ross Levinsohn, the former president of Fox Interactive Media. The report also claims that broad terms for the deal have already been agreed upon.

Update: We’ve reached out to Levinsohn who says of the Times Online report: “No truth to it. News to us.”

Yahoo turned down Microsoft’s original $44.6 billion dollar offer last year. That deal valued Yahoo’s stock at $31 a share, and Microsoft was willing to come back with an offer approaching the mid-$30 a share range. Yahoo still wanted no part of the deal and instead opted to go with a search advertising pact with Google.

When that fell apart, thanks largely to government scrutiny, Yahoo’s stock price plummeted. After dipping below where it was 10 years ago, the stock recently closed barely above the $9 a share level. The extremely low price led large investor (and Yahoo board member) Carl Icahn to buy some 6.8 million more shares of the company — which sent the stock shooting back up around to around $11.50 a share.

Whispers began to circulate that Icahn, who had previously attempted to lead a hostile takeover of Yahoo after the initial Microsoft deal fell apart, may know something that is about to happen at Yahoo — which, incidentally, has been searching for a new chief executive after Jerry Yang announced he would step down amid pressure.

With this new deal, Microsoft would apparently provide $5 billion to help the Miller and Levinsohn team at Yahoo. The two of them would also raise another $5 billion from other investors, according to The Times. This would give the duo enough to buy about 30 percent of Yahoo’s shares and give any of the new investors the right to appoint three of Yahoo’s eleven board members.

Microsoft, in return, would get a 10-year agreement to manage Yahoo’s search business. It would also have an option to buy it outright. The deal may boost Yahoo’s annual income by as much as $2 billion.

This is compelling stuff — if any of it is true. While Levinsohn says there’s nothing to it, where on Earth did the Times Online get all this detail? I’m sure we can all expect to hear more in the coming days.

Update 2: Yahoo is declining to comment on the report.