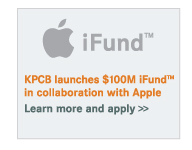 Are you an iPhone application maker planning to compete to get money from venture firm Kleiner Perkins’ $100 million iFund? Or maybe you’re an app maker who just wants to know what apps people are working on? Well, I’ve got some good news for you — and some bad news for some current applicants in the said iFund: A file containing hundreds of app proposals has been accidentally leaked onto the web, TechCrunch reports.

More specifically, an SQL file from Kleiner Perkins’ (apparently former) hosting provider, Meteora Technologies Group, was dumped onto the web, where Google indexed it. This file contained 588 applications for new iPhone apps. As if leaking out your secret iPhone app plans isn’t bad enough, the file also contains names, email addresses and phone numbers. The file may also contain what could be sensitive financial information for these app makers (though after a quick look at the file, I’m not seeing much in the way of that).

Still, the information in this file is very interesting. It sounds like some people are working on some great apps!

Fruux, a Mac application maker, noticed the leak and alerted Kleiner Perkins. The file was apparently removed this morning, but a cached version remains on Google.

We’ve reached out to Kleiner Perkins about this unfortunate event, and will update when we hear back.