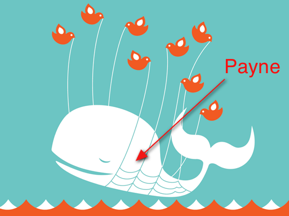 The micro-messaging service Twitter has been remarkably stable over the past several weeks following prolonged periods of downtime and wonkiness. Recently, as former stalwarts Gmail, Amazon S3 and even Netflix have gone down, Twitter has endured. As such, it’s taken a moment to bestow a new title on one of its top developers: Alex Payne will now be the official API Lead.

The fact that people are getting promoted within Twitter rather than fired is definitely a good sign. Payne has been leading the service’s API development for about a year and a half now, as the Twitter Blog notes. Twitter chief executive Jack Dorsey has said in the past that the Twitter API is the way most people connect to the service. In fact, he’s said its traffic is 20 times larger than that of the actual website itself.

Given the rate Twitter’s website is growing, those API usage numbers must be scary. Perhaps that is why Payne will now have someone under him, Matt Sanford, another Twitter engineer. Sanford came over from the Summize team after it was purchase by Twitter and has experience with the search APIs that will be crucial as Twitter continues to implement Summize search into the main Twitter experience.

The two will also likely be vital in any mobile application moves Twitter makes in the future. Which it should do soon, given that it’s basically killed off SMS updates in all but three countries.

Payne caused a little bit of controversy a few months back when a post he wrote on the Twitter Developer blog seemed to suggest that power users of the site were to blame for its woes. Twitter came back to explain that while power users do take up a lot of resources, it’s the spammers they are more worried about. Twitter has taken steps in the past several weeks to eliminate spammers on the service.

Payne has done a good job answering questions about Twitter’s issues on the site’s blogs and apparently is pretty good as his actual job as well.

[The Twitter Fail Whale is the image shown when Twitter is down. Because the downtime was so frequent up until recently, the whale has become a cult figure of sorts. Twitter has been ramping up efforts to slay it.]