How are small game developers making any money these days? While online casual games have been exploding in popularity, some providers are struggling to keep their games free as advertising rates remain low. But PackRat, a game on Facebook, is getting some heat for turning to the alternative of micro-transactions (small payments for in-game items).

PackRat is made by Alamofire, a small Texas company made up primarily of web designers. When the game started, it had a simple structure: You received cards representing various objects, and acquired more cards by stealing them from other players. Cleverly designed and free to play, it eventually reached a mid-sized but devoted player base of almost 70,000 active users.

That left only one hurdle: Figuring out how to make money. Facebook allows click-through ads, which CEO Josh Williams briefly experimented with only to find that players weren’t interested. “People are engaged, they won’t disengage for an ad. We could serve up millions of impressions and just make a pittance off it,” he told me in an interview.

Another problem: The way PackRat worked, with players constantly nabbing cards from each other, was putting some people off. “We’d get these comments saying, I love PackRat, but I’m always afraid this certain friend will steal from me. It became this weird inverse growth inhibitor,” says Williams. So his team decided to do a major design overhaul. 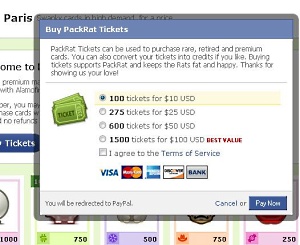 Along with the new version of the game, in which players must trade instead of steal, Alamofire added micro-transactions. With this system, PackRat made certain cards easily accessible by purchasing them with “tickets,” which in turn cost real-world greenbacks. Players can eventually trade for these cards, but of course the ones that cost actual money also tend to be the most valuable in the game.

The idea behind micro-transactions is that the game in question will remain free for most players. Small groups of cash-flush or obsessed players do most of the buying. In Duels, for example, I’ve been told some players have each paid over $1,000 for virtual goods. The items then theoretically trickle down to the rest of the player base. Duels keeps the paying players from dominating by selling randomized grab-bags; in the same vein, PackRat decided to periodically hand out random cards to non-paying members, giving anyone a chance to get the best cards in the game on a fluke.

All the same, the existing player base flipped out when PackRat made the changes. One-star ratings and negative comments flooded the application’s homepage. “[T]he devopers [sic] should be sacked…and the game restored to it’s previous glory. Not impressed at all!!,” reads a recent one. “[T]he community is really turning against them,” another notes. “I am losing all will to continue playing.” Several players also sent me irate emails, based only on a short story I wrote when the company  raised over $2 million in venture funding.

Speaking with me over the phone, Williams, Alamofire’s CEO, sounded resigned to the nasty comments. “When you do have a fan base who really loves something, they get really pissed off when you change it,” he said. “But people are very intuitive, and I guarantee that a week from now, there will be people playing PackRat in ways I never imagined.”

That may be the case: Some new five-star ratings are beginning to appear from satisfied players. And PackRat’s player base has gone up to 81,735 players at time of this post, a gain of well over 10,000 in just a week since I talked to Williams — though it hasn’t been long enough for players who quit over the changes to show up as inactive.

For Williams, the aim isn’t to please everyone, but to achieve a delicate balance in the player base, bringing in fresh blood that won’t necessarily be as obsessed as the old players. “We’ve had days where we did 15 million pageviews on 25,000 people. Those numbers are staggering. If I could multiply the number of people by an order of ten, and reduce the engagement by half, I’d obviously make that trade in a heartbeat,” he said.

Some questions remain unresolved. Many of the comments, and all of the emails I received, were from women — a group that’s often measured as the largest constituency in casual gaming. Some are stay-at-home moms, others office workers. Almost all say they can’t pay anything for their gaming. Continuing to please that segment of players will be a challenge not only for PackRat, but others like it.

Also in question is how far Facebook can be taken as a gaming platform. PackRat is trying to shift from being one of the most elaborate, engaging games on the social network to being even more complex, and demanding long-term social interactions between players. Some players might want to put in endless hours honing their card collections, but for now, the number of people willing to do so has remained limited. 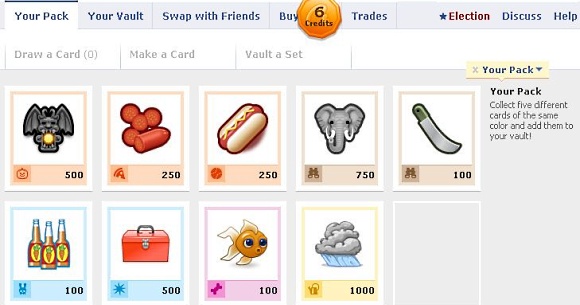