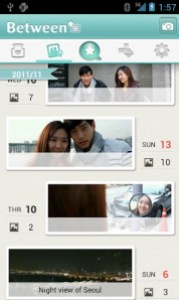 The Korean entrepreneurs behind Between have a charming idea: Let couples create one-on-one social networks for purely private sharing.

With the app, from South Korea-based VCNC, two people can connect with each another to share private photos and secret messages. The private “chat” function includes support for emoticons, so you can dress up your sweet nothings with as many smiley faces, winks, and hearts as your sweetie can stand. In the future, the network could support coupons or other offers, enabling marketers to reach the desireable demographic of young, happy couples in search of romantic experiences and adventures.

Between launched on March 7 at the Launch conference in San Francisco. Park and “value innovator” Edward lee visited VentureBeat’s offices to demonstrate the app, which runs on both iPhone and Android phones — and to show off a picture of Israeli president Shimon Peres checking out a demo at the conference (below).

Perhaps the nicest feature of Between is the ability to view previous communications and photos in an album view called the Memory Box (much like Facebook’s Timeline). With the passing months, this will gradually become an annotated photo album documenting your relationship. I can’t think of an easier way to create a romantic history of a relationship, and it’s considerably less narcissistic than gazing at your own personal Timeline. Of course, for some people, it might turn into a rather racy documentary — but that depends on how you and your S.O. use it and what kinds of pictures you like to send each other.

The app is free to download and use. The company plans to add for-fee services soon that will enable it to generate revenue, starting with printed photobooks. Later, the company may offer other premium services, such as high-resolution image backups, the ability to upload video, and more. 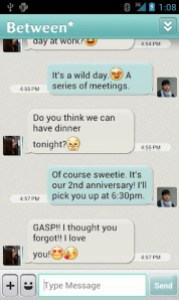 Additionally, Between is looking for partnerships with companies that want to offer special deals to the couple in its network. For instance, a travel company might want to offer a weekend getaway, or a restaurant might offer a 20 percent off coupon for a romantic dinner. Those offers will appear in the app in the future.

Between sounds like a strange sort of social networking service, but actually cuts straight to the heart of what we use network technology for: To connect with one another. Even Mark Zuckerberg recognized this, in his letter to shareholders published in Facebook’s recent document filing for its initial public offering: The biggest social network starts with something very small, the relationship between two people. Between merely takes that thought to an arena where it really matters, your love life.

“Our company vision is to enrich real and offline relationships through emotional communications services,” said Lee.

Plus, as anyone who has ever used social networks will know, it’s all to easy to @ message someone instead of sending a direct message, or accidentally upload a private photo to a public photo album. If you have a social network that’s restricted to just you and your loved one, there’s no risk of those sweet nothings slipping into the public sphere and causing great embarrassment.

Between launched an open beta on November 22, 2011. Since then, the company has updated the app no less than 11 times, and has gathered more than 350,000 users, 54 percent of which use the app weekly. The founders brag that they’ve spent nothing on marketing, and admit that the app has no network effects (since each pair of users is isolated from the rest of the network). The growth has been entirely word of mouth.

Most of the app’s users (78 percent) are in South Korea, but 9 percent are in Japan, 6 percent in China, and 4 percent in the U.S. The company is looking to open a U.S. office soon, in order to expand its presence here and forge locally-relevant marketing relationships.

Of course, I had to ask if it was possible to create Between “networks” with more than one partner. For instance, suppose you’re on a dating site, and still shopping around. Sure, the founders told me: All you need to do is register with a different e-mail address for each partner.

As for polyamorous people or polygamists, I think they’re out of luck. Between is strictly one-on-one for now.

Between is based in Seoul, South Korea. It has raised $1 million in seed funding from Softbank Korea, and employs 15 people. You can download the Between iOS app and the Between Android app for free. 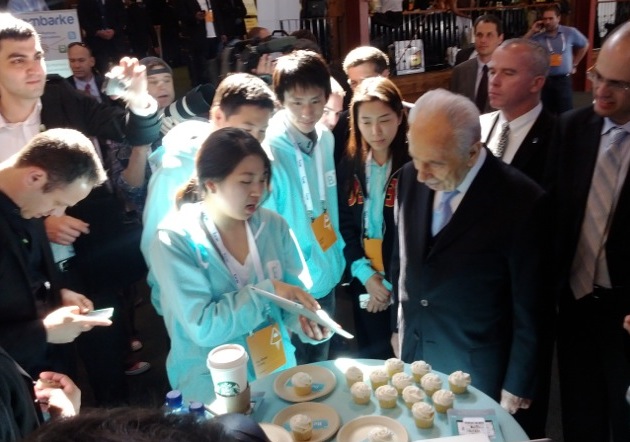 Above: Shimon Peres checks out a demo of Between at LAUNCH, in San Francisco, March 8, 2012. Plus: cupcakes! Photo courtesy VCNC. 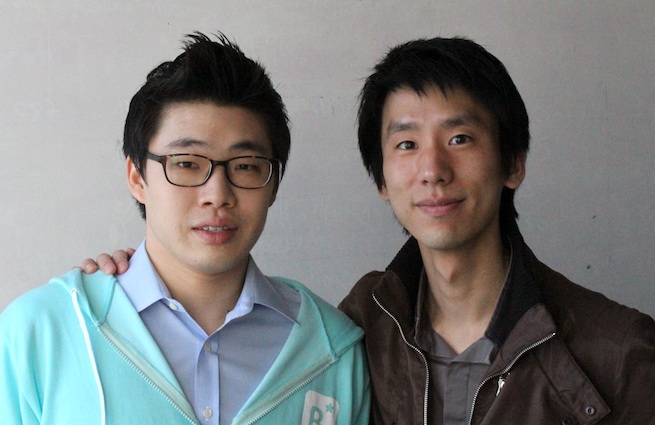