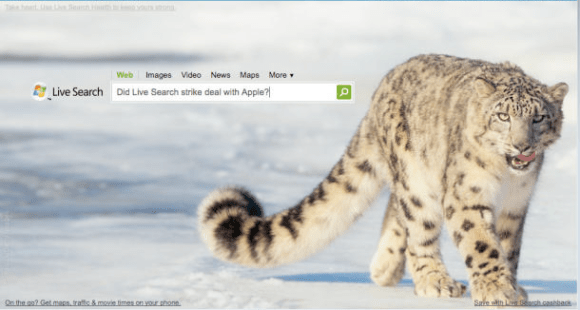 I saw the story once and I thought: Oh, that’s kind of funny. I saw it twice and I thought: Hmm. I saw it three times and saw it all over Twitter and thought: This is getting ridiculous. There must be a shortage of stories in the blogosphere tonight because everyone seems to be pouncing on what is likely no more than a cute coincidence — that a snow leopard was the background image on Live Search tonight.

“Snow Leopard” is of course the nickname for Apple’s next operating system, OS X 10.6, due sometime this year. And while it’s a humorous thought that Microsoft is either trying to be cute or is clueless, if I had to bet, I’d say it was just whoever picks the images for Live Search thinking the Snow Leopard is a beautiful animal (which it is), and deciding to put it as the background.

But something about this story is driving people batty. The usually level-headed Ina Fried from CNET went completely off the deep end with this:

But another crazy thought crossed my mind. What if Microsoft has landed a deal to make Live Search the default in the next version of the Mac OS. For a long time now, Apple’s Safari has had a Google search bar built-in. I don’t know how much traffic that generates for the search giant, but it would seem to be at least as significant as some of the PC deals that Microsoft is paying good money to get.

Obvious animosities aside, mightn’t a deal make sense. Microsoft has talked about needing to spend some money to boost Live Search share.

“Crazy thought” is an understatement here. Let’s set aside the whole Microsoft/Apple decades-long feud for a second. The real question here is why would Apple dump a product that offers the best experience (Google Search) for one that is literally third-rate (Live Search)? Fried seems to think it could happen if money were involved — but Apple has over $28 billion in cash in the bank, is gaining more each quarter, and has no debt. It has more cash on hand than just about any company out there — including yes, Microsoft.

Sure, money can do funny things, but Apple believes in giving its users the best experience. Integrating Live Search into Snow Leopard in no way matches that description. Or as Lonnie Lazar at Cult of Mac more succinctly puts it:

Why it won’t happen: Apple doesn’t need the money and has almost never made it a practice to co-brand its products with services that suck.

Oh and by the way, the snow leopard is now off Live Search.