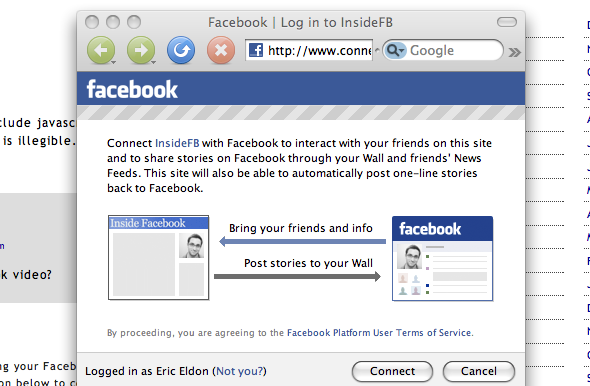 Facebook Connect is a new way for other web site owners to easily access Facebook user data. Having launched last week with more than 100 partners, the service is still finding its legs. At issue is how deeply partners are willing to integrate Connect’s features.

Connect aims to make Facebook a sort of central social hub for the web, sending its 130 million users back and forth between its site and others. When another web site fully integrates Connect, Facebook users can sign into that site with a click of a button. They can then do things like see what Facebook friends are doing on the site and send information about their activities back to the Facebook home site to update their friends on what they’re up to.

Connect is relatively simple to integrate, as you can see from the video below this article. Indeed, VentureBeat itself will integrate with it at some point. Many of our readers are on Facebook and use the site to share and comment on our articles. Until now, we haven’t had a good way of seeing all this activity. Already, our rivals like CNET, TechCrunch and Inside Facebook have made the connection.

For the time being, though, many sites are still only partially integrating with Connect. The reason, in Facebooks’ view, is that Connect is really a set of features and each partner site has its own reasons for integrating it in certain ways. 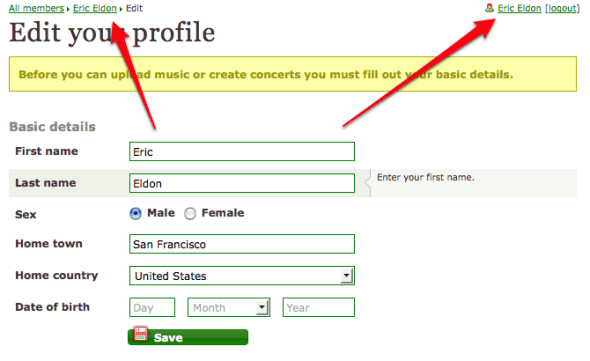 One site might want to use Connect to provide a simple new way for users to log in. Another site may forego that feature and instead ask users to create their own profiles on the site, then let those users log in to Connect to see what their Facebook friends are up to on the site. Yet another site may only use Connect to let Facebook users share information from the partner site back to Facebook itself — information that appears in friends’ news feeds, and other communication channels, like invites and notifications.

Or sites might want to own as much data as they can about their users.

Four of these sites still require users to create their own accounts in addition to signing in on their Facebook accounts, including Koofers, EventBrite, Acteva and Cantorion (pictured). I couldn’t get Vimeo’s to work — nothing happened when I clicked on the link. Only Huddler, Brainfall and the OSU alumni site gave me full access without asking for an additional login.

In particular, some sites that have built-in account systems may not at first choose to use Facebook Connect as a login mechanism to their site. While we see this as a good feature for users and beneficial for the site, it’s truly up to the site. Some sites that have chosen to do include login have already told us that they have seen a two-time or more increase in registrations and 2/3 of users creating accounts via Facebook Connect.

A complaint I’ve heard from some web sites considering Connect integration is that they want to retain control over their user identities, rather than allow Facebook to own them. In other words, other sites want to collect user names, photos, email addresses and more so they can retain that information if they ever turn off Connect. When sites, like the ones mentioned above, ask users to both sign in through Connect as well as through the site itself, the interface gets confusing. A rule of thumb among web developers is that asking for any sort of registration will get a large portion of a site’s visitors to leave.

In the meantime, rivals like Google and MySpace are hard at work on their own initiatives. Google’s Friend Connect offers a simple way for sites to create their own social networks but doesn’t offer a core social hub. MySpace is working on MySpaceID, something similar to Connect but not yet fully launched.

For now, Connect is the easiest way to create a single identity that works across the web. The increase in registrations that Facebook says Connect is bringing in illustrates the key value of that feature. But it also suggests that Facebook may need to start freely sharing more user data with partner sites if it wants Connect to achieve significant adoption.

The video about how to easily integrate Facebook Connect: