A year ago today, CEO Mark Zuckerberg “rang the bell” to open trading in one of the most hotly-anticipated initial public offerings in history as Facebook hit the stock market. And promptly went splat.

Today, not that much has changed.

After debuting close to $40 and cratering to just under $18 in August, the stock has somewhat stabilized in the $25 region, down 30 percent from its opening-day high. And along the way, the story emerged of how Facebook tried to hide some of the mobile risk inherent in its business and how the company panicked and botched its IPO by using vague positive language in its public prospectus and, apparently, specific negative information about slowing revenue growth to institutional investors privately.

Not to mention the $100 million paid to banks to stabilize the stock — on top of $176 million in IPO fees — for efforts that ultimately failed. And technical glitches that cost the NASDAQ $62 million in compensatory fees.

All of which negatively affected the overall IPO market. 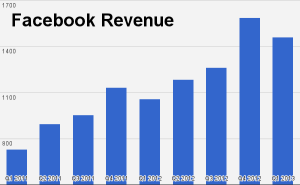 That all said, however, Facebook has seemingly nicely recovered from the disaster — at least from a business fundamentals perspective. Revenue growth was strong in its latest quarterly earnings release, with the company booking $1.46 billion in revenue for Q1 2013, compared to about $1 billion a year ago. More importantly, mobile was significantly up, accounting for 30 percent of ad revenues, and Facebook singlehandedly accounted for 6.5 percent of all online ad dollars spent in the U.S.

And the company has massively beefed up its advertising options. It’s now posting retargeted ads right in the news feed, once sacrosanct territory. And in a move aimed directly at advertising giant Google, Facebook has launched a self-serve tool that allows advertisers to target its users based on what they actually buy and want to buy offline … which is a significant move to targeting the intent graph that Google hits so well by virtue of being a search engine, but Facebook has often missed since its visitors are on the site to meet and greet people. In addition, as soon as July, Facebook will be rolling out 15-second video ads in the news feed, a product that it will be charging major brands millions of dollars for.

All of which is having an effect.

The consensus recommendation for Facebook is currently a buy, with a price target of $34. Most analysts are in the Strong Buy category, with few or none in the dreaded Underperform or Sell slots. And in the past four weeks, analysts have revised their earnings estimates upward by a factor of 6 to 1. 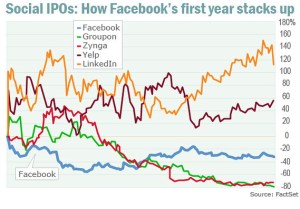 So there’s a lot of positive in Facebook’s future, and there’s a ton of potential. But it’s still challenging when analysts compare Facebook stock with other internet high-fliers like LinkedIn or Yelp, which rose 148 percent and 48 percent in their first years, respectively.

But at least it’s better than Groupon and Zynga, both down around 75-80 percent.

And, I would argue, while there are a ton of challenges and many very significant competitors — primarily Google — the future for Facebook is bright.

Even if the public start was a stubbed toe.