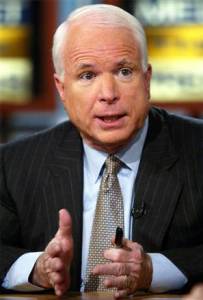 One of the biggest complaints about Twitter is that its 140-character limit is simply not enough to say what you need to say sometimes. Of course, this limit works both ways — it can also stop people from going on for too long about something. And that’s something that politicians are known for. So in a way, an interview with a politician conducted entirely over Twitter almost makes sense. Almost.

And that’s exactly what ABC News’ George Stephanopoulos is planning to do next week. On Tuesday, Stephanopoulos will interview senator and former presidential candidate John McCain for his show, “This Week.” To conduct what the network is calling the first “twitterview,” both the questions and answers will be sent out via Twitter, bound by the 140 character limit.

The interview, which can be “seen” at noon eastern standard time on Twitter, will last between 10 and 15 minutes. Of course, to see both the questions and the responses, you’ll need to follow both Stephanopoulos and McCain. Stephanopoulos will be soliciting questions to ask McCain over Twitter as well.

Both Stephanopoulous and McCain have been quite active when it comes to using Twitter. Unfortunately for McCain, his usage only seemed to pick up after he lost his bid for the presidency to Barack Obama, who at the time was much more active on Twitter (or at least his aides were).

Since being sworn in, however, President Obama’s Twitter account has been silent. McCain, on the other hand, is using Twitter to break news about his upcoming schedule. Early today, he tweeted, “Tweet Announcement: Met with the Vietnamese Ambassador to discuss upcoming trip to Vietnam – posted here first!”

An interview limited to 140 character questions and answers might be interesting in a gimmicky kind of way, but it’s probably not going to be Earth-shattering. Still, it’s good to see big media and politicians using the service in an effort to be more transparent. It’s something I’d expect from an alumni of Orange High School in Pepper Pike, Ohio (which both Stephanopoulos and I attended).