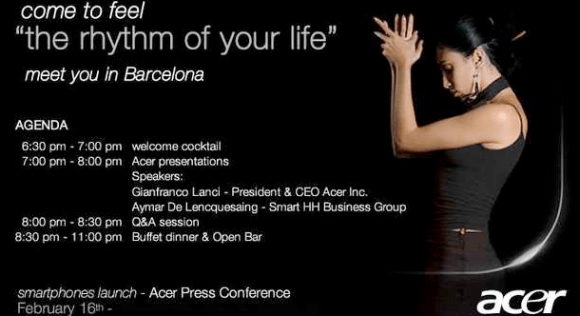 Once again, Apple has kick-started a trend. Companies that formerly made computers are now apparently going to start making mobile phones, with Acer being the latest, according to a report from Pocket-Link.

An invitation has gone out that asks members of the media and mobile communities to meet in Barcelona, Spain for a press conference on February 16 at the World Mobile Congress. The invitation promises “the rhythm of your life” and features a picture of a female flamenco dancer, but the key phrase is at the bottom of the invite: “smartphones launch.”

While such a move has been rumored for a little while, one key element about Acer’s smartphone isn’t clear: what mobile OS it will run. Google’s Android is the hot (open) platform right now, but Acer is not a member of the Android Open Handset Alliance, as Local Mobile Search notes. Could that mean that the Acer phone will use Windows Mobile? Acer, as the number 3 PC maker in the world, obviously has a relationship with Microsoft for using Windows on its machines.

It’s also worth noting that Microsoft is expected to unveil Window Mobile 6.5, with a completely revamped look, around the same time. And the larger rumor is that number 2 PC maker worldwide (number 1 is the U.S.) Dell is also looking to get into the mobile handset game with a Windows Mobile phone.

While at first blush it may seem quite odd that these computer manufacturers are getting into mobile phones, take a look at your iPhone or Android phone again — it’s basically a computer. Sure, it’s not as fast as your desktop or notebook, but it can increasingly do quite a few things that computers can do.