Collective Media, an ad network you probably haven’t heard of, has been slowly rising through the ranks of ad networks. It is the 19th largest ad network, according to the most recent Comscore data (February), up from 21st last year.

It has just raised $20 million more in a financing round led by Accel Partners, with iNovia Capital participating.

Collective chief executive Joe Apprendi tells me the company seeks to differentiate itself by focusing on serving leading brand advertisers, placing ads on Web sites that are the largest 500, as measured by Comscore. It has also focused on acquiring the best targeting technology, highlighted last year when it bought Personifi, which uses semantic technology to understand the context of pages where Collective places ads. 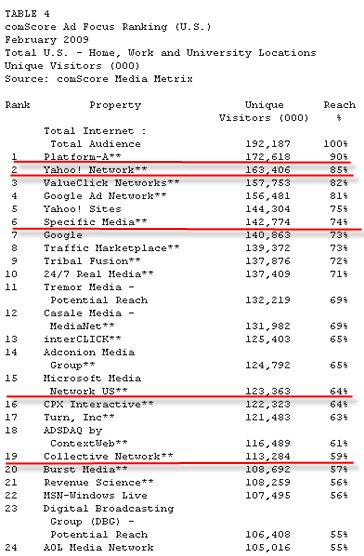 Collective also places a cookie on users’ browsers to see where they visit, and combines it with the semantic meaning of pages to help it target things like behavior, context and demographics. Its AMP technology powers other ad networks, such as IDG Tech Network, which serves our frenemy blog GigaOm.

Collective focuses on unsold or unreserved ad space (the industry’s dreaded term is “remnant”) and competes in that arena with the big three ad networks: Yahoo, AOL’s Platform A, and Microsoft Media Network. Other players include Specific Media, and Undertone.

The company, which says it is profitable, will use the new funds to accelerate growth and technology development and explore acquisitions. It says it grew revenue 200 percent last year, and gross earnings (EBITDA) by 333 percent.

The company is based in New York City with offices in Boston, Chicago, Dallas, Detroit, Los Angeles and San Francisco.

Collective’s main backer, Accel Partners, believes the digital media and advertising market will remain strong for several years, partner Richard Wong tells me. He says that’s why the firm has invested in a range of such companies at multiple stages of maturity, including early stage (e.g. Facebook, Glam, Trulia, Admob, Yume, OpenX) and now in more mature, or “growth” stage, investments (Collective Media being the first investment from the $480M Growth Equity Fund the firm raised in December).