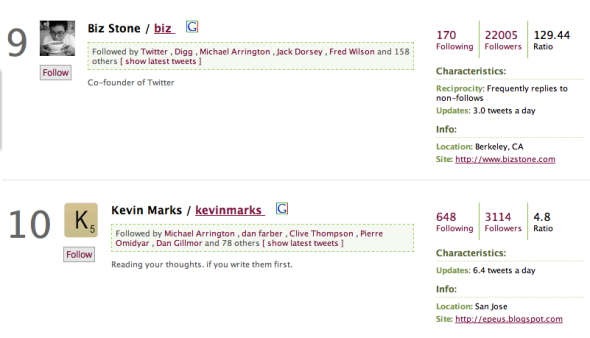 Micro-messaging service Twitter offers a simple way to tell the world what you’re up to, and see what your friends are doing. The problem is that it’s missing social context to help you find other users you’d be interested in following. As Twitter has grown to millions of users over the last year or so, the problem has magnified: More and more random strangers are looking for relevant people to follow. Enter an increasing number of companies that want to solve the problem by adding social context to Twitter.

The one I’ve been testing out for the last few days is Mr. Tweet. The way it works is that you follow Mr. Tweet’s company Twitter account (@MrTweet), and it sends a link to a personalized report that it has generated for you. The report shows you meta-data about other users, like how often they post Twitter messages (called “tweets”), how likely they are to follow people who follow them, and more. In one part of the site, you can see rankings showing who “influential” Twitters are, partially based on whether they’re tweeting about the same topics as you, and also if they have a lot of followers.

There’s a more valuable section of Mr. Tweet, where you can see who’s following you and who might be interesting for you to follow back. This feature is a useful way for me to find people I’ll actually have good conversations with on the site. Still, what I really want is a way to find interesting people who aren’t already following me, who aren’t necessarily popular.

Mr. Tweet is one of the most recent to join the pack of Twitter friend-finder tools. I’m trying out some other services suggested by the Twitter-focused blog Twitterati. Twellow, built by media company WebProNews, let’s you search people by category, such as “Geeks” or “Food.” JustTweetIt does much the same. Both services remind me of Yahoo’s original site design: Man-made hierarchies, rather than personalized, automated search. Twubble is another service that, like Mr. Tweet, tries to automatically find interesting people to follow. But it doesn’t provide an obvious way for you to import your current Twitter friends, so it gives recommendations about people to follow even if you’re already following them. For example, it recommended I follow VentureBeat writer MG Siegler (@parislemon) even though I’ve already been following him for a year or so.

In sum, adding social context to Twitter is still a work in progress. That’s why I’m intrigued about Twitter being a partner for Facebook’s new service, Connect. Facebook is building Connect to let users sign in to other sites through Facebook, and to help users find friends on those sites who are also on Facebook. Since I’m connected to far more of my real-world friends from my hometown, from college, and from the rest of my life on Facebook than on Twitter, Connect could help me find those of them who are also Twitter. My real friends, after all, are some of the people I’d like to follow the most.

You can find me on Twitter here along with fellow VentureBeat writers Dean Takahashi, Anthony Ha, Chris Morrison, Dan Kaplan and the aforementioned MG Siegler. Oh, and we have a VentureBeat account (for our posts) as well.