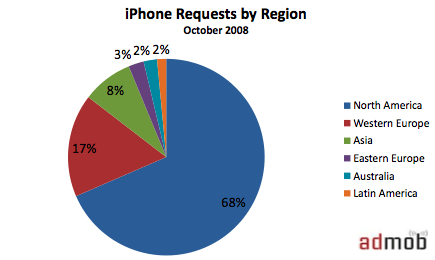 Mobile web advertising provider Admob is finding significant traction with its iPhone ad network. The device has gone from generating 28 million ad requests in July, when the company launched interactive iPhone-specific ad features, to 236 million in October. Now the iPhone is the top device on Admob’s network, making up 4.1 percent of all ad requests.

Admob offers various types of banner ads that appear on mobile web sites, including ads that advertisers pay for based on the number of user impressions or the number of clicks generated. The San Mateo, Calif. company had 5.8 billion total ad requests worldwide in October. Because this is only a portion of the total mobile web advertising traffic, one can only assume that Admob’s report is indicative of a larger surge in mobile web usage around the world, and iPhone-based web usage in particular.

Of course, the other issue is how mobile advertising spending itself will be affected by recession-fueled cutbacks. Admob has been bullish about its chances, as the company told us last month.

Devices made by rival manufacturers Sony Ericsson and Nokia still dominate around the world.

While Motorola devices are making up a smaller share of Admob ad requests than previously, they still lead in fast-growing Latin American markets. Motorola’s RAZR had 10.3 percent of Admob’s market share in the region; Admob itself grew 138 percent over the last year, there, to 109 million requests in October.

Admob recently raised $15.7 million in a round led by Sequoia Capital.