Adobe is trying to move front-and-center in the online video market with today’s launch of the Adobe Media Player and its related content network, Adobe TV. Through its Flash Player — which powers sites like YouTube — the company already played a big part in the dramatic growth of web video. But now Adobe wants to get involved more directly in the media game, and hopes to get a bigger piece of the revenue.

Built on Adobe’s AIR technology, the media player is a hybrid web/desktop application, through which users can stream or download videos to their computer.

With options like Windows Media Player and RealPlayer already out there, you probably weren’t thinking, “Gee, what this world needs is another media player.” Adobe aims to be more like a TV on your computer — the company will provide content directly to its player via deals with CBS, MTV, Universal Music Group, PBS, CondeNet and Scripps Networks. But that means it’s competing with iTunes, which is a pretty steep hill to climb. 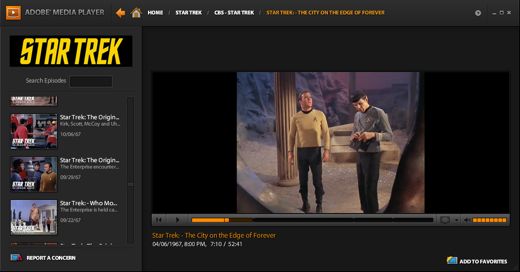 Adobe’s player seems to have two big advantages: plenty of free, advertising-supported content (you have to pay for most of the videos you find on iTunes), and the fact that it’s the first player that allows you to download high-definition Flash video to your desktop. (Because it’s so fast and easy-to-use, low-definition Flash has already become nearly ubiquitous.)

The other big question is whether viewers really want standalone video players, which you need to download and install. Joost seems to be struggling with a similar business model, and says it will soon offer in-browser videos. Meanwhile, NBC-Universal and Fox recently teamed up to launch Hulu, where viewers can watch high-quality video without a separate player.

Adobe TV, meanwhile, will focus on educational videos about Adobe products, and will be divided into sections for photographers, designers, video professionals and developers. This may seem rather limited in scope — and it is, compared to the other how-to video sites out there — but it also speaks to the breadth of Adobe’s offerings. The number of people wrestling with, say, Photoshop alone should guarantee a decent-sized audience. Adobe probably isn’t going for CSI-sized numbers here.

The company is only the latest in a long-line of tech giants trying to become major media players, too. Even if these new offerings don’t grab the number one spots right away, they still seem like smart moves — the media player reinforces Flash’s dominance, while Adobe TV supports the company’s other products. And hey, a similar expansion worked out pretty well for Apple.