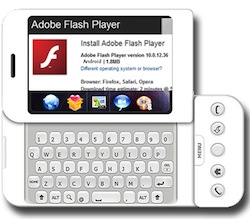 As speculation continues about when Adobe‘s Flash platform is coming Apple’s iPhone, a new announcement suggests Apple is becoming the odd man out. Adobe says its new, more mobile-friendly version, Flash Player 10.1 should soon work on most major smartphones — including the BlackBerry, and excluding the iPhone.

Adobe says Flash already powers 75 percent of web video and 70 percent of online games, and in April 2008 it announced an initiative called the Open Screen Project to try for similar dominance on mobile phones. Development on Flash Player 10, which was released a year ago, was already nearing completion, so 10.1 is the first version developed with Adobe’s new mobile focus in mind. The company says this the first full version of Flash (as opposed to the stripped-down mobile version, Flash Light) that works on both mobile devices and PCs.

Adobe is launching this new version of Flash at its MAX conference this week in Los Angeles. Flash 10.1 will support mobile capabilities like multi-touch and accelerometers. Adobe says software rendering performance on mobile has improved by more than 87 percent, memory consumption has dropped 55 percent, and Flash 10.1 also conserves battery life. A bunch of smartphone partners, including new ones like BlackBerry-maker Research in Motion, are already signed up:

This news could put pressure one Apple in a couple ways. First, if every smartphone but the iPhone can support Flash content, the iPhone is going to look comparatively crippled — which might push Apple to work with Adobe to resolve whatever obstacles remain. (That would be a boon for web developers, and Adobe itself, who have had to find workarounds to bring Flash content to the iPhone.)

Plus, broad mobile support for Flash means developers could build a rich web app that’s accessible on almost any phone via mobile browsers. That’sa very different model from the one popularized by Apple, where companies build separate, downloadable apps for each smartphone platform, and sell them in an App Store.