When NBC made the decision to leave Apple’s iTunes store late last year, several of its shows were among the most popular on the service. NBC went on to put its content on several other services, including iTunes-rival Amazon, and launched its own service with Fox, the online streaming video site Hulu. Still, it always seemed odd that NBC, which has arguably the best content, wouldn’t be paired with iTunes, perhaps the top content provider. Today, NBC has come back.

Apple chief executive Steve Jobs announced the renewal of the partnership on stage today at Apple’s “Let’s Rock” event. This is a big move for Apple as it hopes to make its iTunes video store the dominant player that the iTunes music store has become. And, as if bringing NBC content (which includes USA, SciFi and Bravo as well) back in the store wasn’t enough, there is even better news: It’ll be available in high definition (HD).

To me this makes Apple’s line to the living room, the Apple TV, a much more attractive purchase. NBC content joins all of the other major networks in putting its shows up for purchase on the device, and the fact that it’s HD means that I can pretty much ditch my cable box now and take cable television out of the equation. 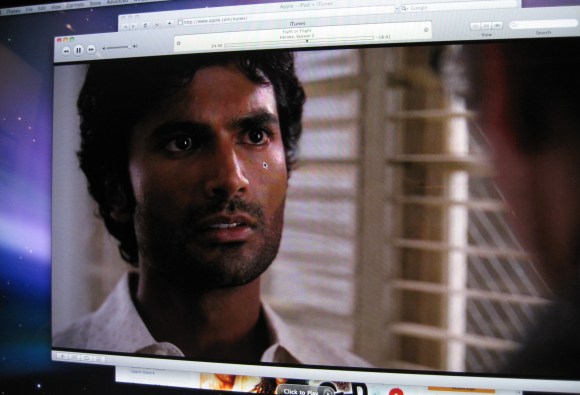 Certainly, if you watch a lot of television that may not be feasible, but at $1.99 for a standard definition show and $2.99 for a high definition show — and season passes that reduce those prices significantly (depending on how many episodes are in a season) — I can buy quite a bit of content for the $100-plus I’m paying a month for cable.

At the end of the day it always made sense for NBC to come back to iTunes. (I’ve been predicting as much for a while.) While NBC had been unhappy with the amount of money it was making from Apple on its sales, that was still a chunk of money that it simply hasn’t been making the past several months.

As I wrote back in May:

Now, NBC is back, and looking beautiful in HD.