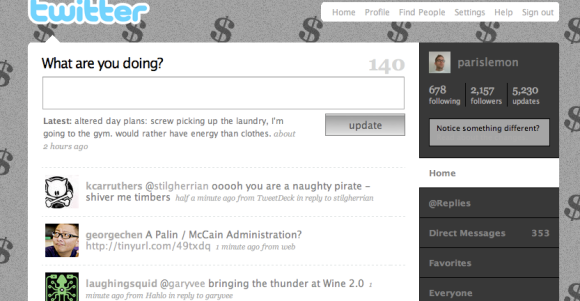 We first caught a glimpse of the Twitter redesign in mid-July, when apparently an overzealous employee of the micro-messaging service jumped the gun on the roll out. Seeing its shadow, the redesign went back into hibernation for another couple months. Now it’s ready, and looking good, but really not all that different. Instead, Twitter focused on subtle changes to the site we all know and love (are addicted to).

Just as we saw in July, the main site navigation has been shifted from the top to the right-hand side. The area for your latest tweet (Twitter message) has been moved under the “What are you doing” box. Timing on tweets is also now italicized. @Replies, the syntax for directing a public message at someone in particular is better explained now as well. The Archive area has been removed in favor of having users simply go to their main profile page to see their archives.

The most important change however comes on the backend. Twitter is now using asynchronous JavaScript and XML (Ajax) to load new items in the home tab as well as the replies tab. Previously, it was reloading the entire page when you would try to refresh. This should significantly cut down the load requests for Twitter.

There are also various user interface changes. Star and reply icons are now hidden until you hover over them and lines between tweets have been lightened. There is also a new custom designer (shown below) for your own Twitter page. This should ease the resentment for those users who spent a long time customizing the design of their pages for the previous format.

The scope of this project was limited to light-weight front-end work. We have whole other teams working on back-end changes and more fundamental functionality changes (which, as mentioned above, this is also laying the groundwork for).

Twitter’s redesign coincidentally falls on the same day that FriendFeed, which relies heavily on Twitter for updates, rolled out its redesign to the public. 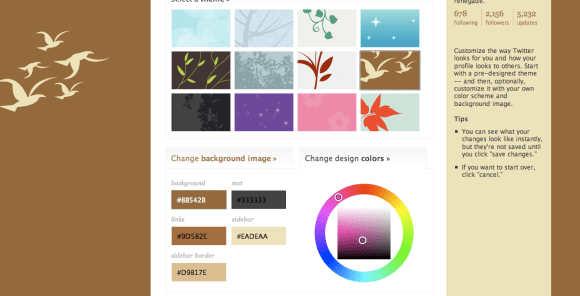