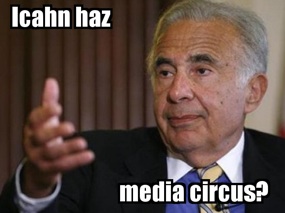 In what sounds more like a Brad Pitt and Angelina Jolie date than a multi-billion dollar company’s shareholder meeting, Carl Icahn says he won’t show up so that it doesn’t turn into “a media event.” I can see it now, paparazzi perched in trees with zoom lenses, screaming fangirls. Mr. Icahn, you’re on Yahoo’s board of directors now, shouldn’t you be there?

The meeting takes place tomorrow, but Icahn outlined his feelings on it today in a blog post. Despite gushing over each other ten days ago when it was announced that Icahn would join Yahoo’s board and give up on his bid for a hostile takeover, Icahn now doesn’t seem exactly thrilled with the partnership. As he explains the move today, it seems to be merely a tactical maneuver. He realized he didn’t have the support required to win the majority of Yahoo’s directorships, so he cut a deal rather than risk being a vocal, but overruled minority.

We of course all pretty much knew that, but should Icahn really be saying that the day before what will arguably be Yahoo’s most important shareholder meeting ever?

As part of his deal with Yahoo, Icahn will get a say in any offer presented to Yahoo — or as Icahn himself puts it, “Carl Icahn will be a member of that committee.” (What is it about Yahoo that drives others to start speaking in third person?) Another part of the deal included the possibility that he could get up to two other members of his alternative board slate elected with him. Of course, Icahn won’t be there tomorrow to see if that goes through.

Icahn goes on in his post to say that he recently met with Yahoo chief executive Jerry Yang and chairman Roy Bostock, and that he still disagrees with them “on many points.” The first of those may be writing subversive blog posts about Yahoo.