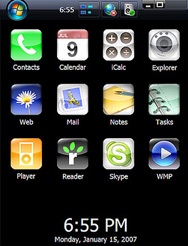 In a list of companies excited about the iPhone, you’d think Microsoft might be near the bottom. The two are, after all, decades-old rivals. However, Microsoft isn’t too proud to look past a great opportunity when it sees one — and that’s exactly what it sees with the upcoming iPhone SDK (software development kit), according to Fortune.

Specifically, Microsoft is looking at ways in which it can bring its popular Microsoft Office software suite to the device. Having the ability to view and edit Word and Excel documents could certainly be useful to users — and if Microsoft doesn’t bring that functionality, you can bet more users will start looking at Google Docs, which already allows you to view Microsoft Office files on the iPhone, but not yet edit them.

Though Microsoft doesn’t develop much software for Apple, they have maintained a Mac Business Unit (MacBU) for years that is specifically tasked with creating Microsoft application for Apple’s operating systems. The unit is said to be one of the largest groups of Mac developers outside of Apple itself.

Still, it could be a while before we see any Microsoft product on the iPhone. Even with all those developers, the MacBU has a history of being extremely slow at releasing new products. Case in point: it took the group a solid five years to update Microsoft Office from the 2003 iteration to the just-released 2008 version. This slowness was highlighted by the fact that Microsoft was unable to create a “universal” version of the software (meaning it would work at full speed on both the old PowerPC chips and the newer Intel chips on Apple computers) until this latest release. Even Adobe was able to create a fully universal version of Photoshop, a much more complicated program, months before.

A company Microsoft purchased last year, TellMe, makers of voice recognition software, hopes to get something on the iPhone sooner rather than later. TellMe allows users to call or text message to obtain details about local business for free. Provided the SDK allows the company to do things such as location-based tracking, they plan to get a version for the iPhone out there “as soon as we can,” general manager Mike McCue tells Fortune.

Find more of our thoughts on the iPhone SDK here and here.

[picture is a iPhone skin for Windows Mobile credit: flickr/labnol]