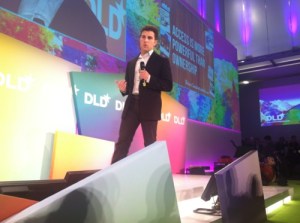 Airbnb, a marketplace for living spaces, has a New York footprint so large that there’s at least one Airbnb rental on every city block, co-founder and CEO Brian Chesky said at the Digital Life Design conference in Munich Monday.

New Yorkers using Airbnb to rent out their apartments, extra bedrooms and even couches — more than 10,000 in total — are now making, on average, $21,000 per year in income, Chesky said.

Some local listers make as much as $100,000 per year, he added. “That’s transformative income.”

Of course, the proliferation of shared spaces in the city has several negative side effects, including more than a smattering of complaints from neighbors and questions of legality. Chesky, however, did not address these issues.

At DLD, Chesky did speak extensively about the notion of a “sharing economy,” or what he believes is the third wave of Internet that gets people offline and connecting in the real world, as well as a movement that is stimulating local economies.

The movement includes a number of startups proffering the exchange of shared goods, including Loosecubes, RelayRides and TaskRabbit.

Instead of keeping up with the Joneses, we’re going to be sharing with Joneses, he said. “If we are successful … I think people will one day forget what the world was like before the sharing economy,” Chesky added.

Three year-old Airbnb powers rentals in 19,000 cities in 192 different countries. In July, the startup closed a $112 million round of funding at a $1.3 billion valuation, and just released an Android application last week.