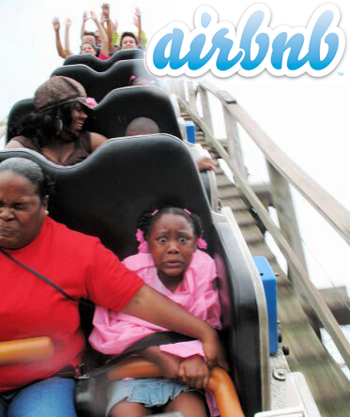 Social bed and breakfast marketplace Airbnb started the week on a high note by confirming that it had raised a large $112 million second round of funding that pushed the startup’s valuation to an estimated $1.3 billion. Just days later, the company’s reputation spiraled down after social link sharing community Hacker News caught wind of an Airbnb user’s emotional account of merciless renters, who ransacked her apartment and turned her entire life upside down.

“Three difficult days ago, I returned home from an exhausting week of business travel to an apartment that I no longer recognized… With heart pounding and stomach churning, I slowly swung the door open as both a pungent odor and the full realization of what had occurred washed over me: this wasn’t just a random break-in. My home had been burglarized, vandalized and thoroughly trashed by a ‘traveler’ I connected with via the online rental agency, Airbnb.com,” wrote San Francisco resident EJ on her personal blog June 29.

Airbnb’s service pairs travelers seeking a unique experience with locals (like EJ) willing to rent out their spaces for a fee. But as EJ learned, the company does not insure any damages incurred during the renter’s stay.

Contrary to statements made by Airbnb CEO Brian Chesky in a public letter published by TechCrunch, EJ claims that the company hasn’t been in close contact with her since the incident. According to a follow-up blog post written July 28, the only interaction she claims to have had was through correspondence with an unidentified Airbnb co-founder, who is described as more concerned with the company than her awful situation.

I received a personal call from one of the co-founders of Airbnb. We had a lengthy conversation, in which he indicated having knowledge of the (previously mentioned) person who had been apprehended by the police, but that he could not discuss the details or these previous cases with me, as the investigation was ongoing. He then addressed his concerns about my blog post, and the potentially negative impact it could have on his company’s growth and current round of funding. During this call and in messages thereafter, he requested that I shut down the blog altogether or limit its access, and a few weeks later, suggested that I update the blog with a “twist” of good news so as to “complete[s] the story”.

It’s difficult to give much weight to EJ’s accusations, since she’s chosen to remain anonymous. However, both the San Francisco Police Department and the San Francisco Chronicle have confirmed part of her story as credible.

Airbnb declined VentureBeat’s request for an interview to dispel misinformation about the situation and clarify the company’s future intentions.

“We were shocked and disturbed to hear about this unfortunate situation and since that moment have done everything in our power to assist EJ. We have offered assistance with accommodation, transportation, and financial support to help EJ find some sense of security in light of such tragic circumstances. We have also been assisting the police with their investigation and have confirmed with the SFPD that they have a female suspect in custody that they are investigating for vandalism and theft. Safety and security are our utmost priorities and we are taking steps to prevent this from happening again.”

Plenty of people will be watching Airbnb’s next steps. The company cannot afford to have another incident like this happen without causing concern among investors. But the startup still has lots of potential (as evident from the number of copycat competitors) and many options to help keep its users safe from vandalism. It also has millions in the bank to figure out how to factor a vandalism safety net into its business model.

Founded in August 2008, the San Francisco-based startup has $119.8 million total funding to date from Andreessen Horowitz, DST, General Catalyst, Jeff Bezos, Ashton Kutcher and others. The service has seen incredible growth of 800 percent in the last year and had over 1.6 million local homes booked since it launched in 2008.