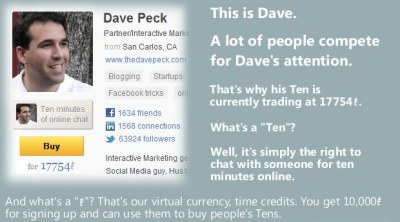 A privacy dust up that started Monday night has unintentionally given a little-known startup its 10 minutes in the spotlight.

Allthis, an online marketplace where users buy and sell 10-minute chunks of time, found itself on the defensive after front-end web developer Joel Housman accused it of “douchebaggery,” and popular publication Boing Boing called it a “shifty startup.”

“We have literally seen our traffic increase 100x,” Allthis founder Christoper Poseley told VentureBeat. “Our experience over the past 24 hours has been interesting and is highly relevant to the broader national discussion around online privacy.”

So what’s with all the hubbub?

Every individual who joins the site is assigned a single token that others, if they have enough time credits, can buy, using virtual currency, at the going market rate. The token represents 10 minutes of your time and, as a condition of the registration process, you pledge to honor and give the allotted time to the highest buyer. But, before today, because the startup’s mission is to allow anyone to get in touch with anyone else in the world, members could buy any person’s token, whether or not that person was a site user.

“In order to show what the potential value of anyone’s time is, we allowed our members to trade options on non-members,” Poseley explained.

Here’s how this works: You find Joel Housman so interesting that you’d like to pick his brain on iOS development, but Joel’s not a member of the site. You still want to express your interest, so you tell Allthis to create a non-member profile for him. Now you can “buy” his token, and others can purchase the token away from you at a higher price. The value of Joel’s time goes up with each purchase, and if Joel were to ever claim his profile, 10 minutes of his time would actually be up for “sale” — real money doesn’t ever change hands. Until then, the exchange would merely up the perceived value of his time.

But Joel doesn’t want to be a member of Allthis. He finds his “fake profile,” believes that the startup has stolen his identity and takes issue with the appearance of a profile he did not create on a site he does not endorse. He is furious. He accuses the startup of scraping data from Twitter, Facebook and LinkedIn to “seed the site with accounts that their users might want to buy the time of.”

Joel isn’t alone. Rob Beschizza, managing editor of Boing Boing, finds the profile he didn’t create and believes that Allthis is misleading folks into thinking they can buy his time. “You can’t. We haven’t signed up; it’s just created a sleazy opt-out system and thrown in everyone it can think of,” Beschizza says.

Scandalous? Hardly, but perception is everything.

“We are not scraping. Our users create profiles of people they want to speak with,” Poseley said. “It’s an important distinction that each of these non-member pages were created from our users … we were not going out and creating a database of profiles ourselves.”

The process worked like this: Users would search for a non-member by name or Twitter handle. “When our engine found the person they were searching for [on Twitter, LinkedIn or Facebook, the user] would import the information to the profile page,” Poseley said. “The method in which our users create non-member profiles is very similar to how users at Pinterest.com create pages,” he added.

No matter. The company has disabled the non-member pages in response to the uproar and is working to evaluate how best to rectify the misconceptions about its practices.

“The users on our site understood how the system worked,” he said. “Nonetheless, some changes must be made. Our goal is to create an efficient marketplace for people’s attention, and we will continue to tweak the site as necessary to make our intentions clear.”

But with all the attention, Allthis has been presented with an opportunity to up its own public profile, and it’s a gift token the small angel-backed company should exchange for as much value as it can.