On Thursday, Google unveiled a new feature on Google+: YouTube parties. The concept is simple. Gather your friends, grab a list of YouTube movies you like, and watch them together online, even if you’re miles apart.

Really, Google? This is what’s going to make Google+ kick some Facebook ass?

I get the picture from a corporate perspective. YouTube is hugely popular; Google+ has some publicity challenges. Flash of genius marketing inspiration: Put the two together, and hope the magic pixie dust from the one rubs off on the other.

The execution is super-simple. Start a hangout, click the YouTube button at the top of the screen, add YouTube videos. Then you and your friends can watch them together, even if you’re separated by oceans.

I’m sure it makes for good TV commercials, maybe even lovely Hallmark cards, but really? 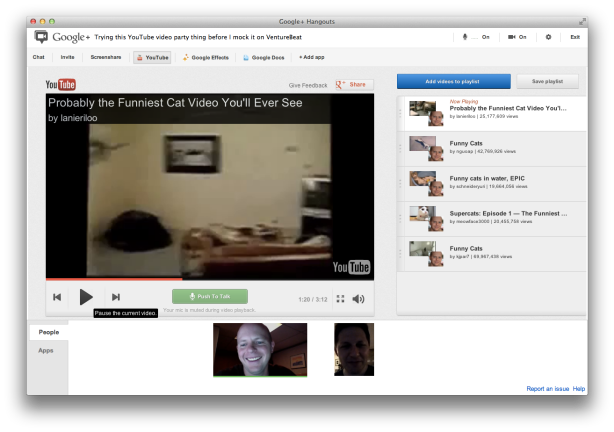 I tried it and connected with a friend who I met while working with Intel on a number of projects. It was 10 p.m. my time, 6 a.m. his as he was waking up early on vacation in Portugal. And we chatted for five minutes, catching up.

The video? We paused and ignored it.

Probably because hanging out, even Google+ online style, is about connecting with people. Communicating. Probably also because talking to each other while the video was playing was basically impossible, which pretty much negates the whole social “watching together” concept.

But wait! There’s an extra-special, super bonus feature! You can share the videos with your other friends on Google+ … you know, the ones who didn’t want to join your hangout in the first place. Hmmm.

And that’s not all. Because Google+ Hangouts can be recorded — Hangouts on Air — you can share the video of you and your friends watching videos while not really together so other people (who you may not know) can in turn watch you watching videos. Possibly even together with their friends in a Google+ hangout of their own!

How meta is that? Too meta for me, I’m afraid. (Although I’d like to see someone take it up to five or six levels. That’d be cool internet art.)

Now, very likely I’m just being a grumpy old man. But I have the feeling that even though a few people may think that YouTube parties are the best Google+ feature yet, they’re actually a solution in search of a problem. And I just don’t think it’s one I have.