Anyone who still doesn’t think that online digital distribution of films is the real deal apparently slept through this week. Today brings another big announcement: Amazon is launching a service, aptly called Video on Demand, which will allow some 40,000 films and television programs to be streamed over the Internet, according to the New York Times.

This follows the week’s earlier digital distribution announcements coming out of the E3 expo: Netflix’s partnership with Microsoft to brings its “Watch Instantly” streaming movie service to the Xbox 360. And Sony’s announcement that its Playstation 3 system would allow for movie rentals and downloads over its Playstation Network.

Amazon chief executive Jeff Bezos first hinted at this service was first hinted at back in May. At the time it brought up more questions than answers and some of those questions still persist. After all, Amazon already has another Internet-based digital distribution service, Amazon Unbox. But this offering looks to be much more robust than that one which offered movies you downloaded to own and downloaded to rent over the Internet.

This new service is more akin to Netflix’s Watch Instantly feature which allows Netflix subscribers to instantly watch over 10,000 of its catalog of films streaming over the Internet. The major difference? Well, it’s the difference between 40,000 and 10,000 — the number of titles Amazon will offer versus the number Netflix serves up. But perhaps more importantly, it appears that Amazon’s offering will include new releases as well as catalog films. The Netflix offering only offers older titles for now.

There is no word about whether any of the films will be offered in HD, as NewTeeVee notes, but my guess would be no, at least not at first. The service is streaming-only for the time being and streaming HD video is still very bandwidth intensive and thus expensive.

Interestingly enough, it’s also not entirely clear whether this new service will completely kill off Amazon Unbox. It would make sense for that to happen however Amazon has deals for Unbox with the likes of TiVo that allow its customers to access that content on their boxes. And there are still people out there who prefer to buy their movies and own a copy of them, even if it is a digital one.

The two at the very least will co-exist for a little while. 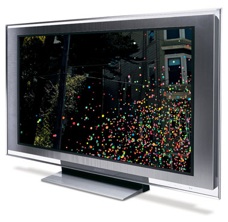 One new deal that has been made is with Sony to bring this new Amazon Video on Demand to the Bravia line of televisions. At first this will require the Sony Bravia Internet Video link, a $300 box that connects to the television, but eventually the service is likely to be piped directly into the televisions.

This deal is interesting because it seems that Sony is cutting deals to compete against itself. After all, it’s digital download aspirations aren’t limited to the Playstation 3, it previously stated that it too would offer a service that distributes movies over the Internet right to its Bravia televisions. Perhaps the Netflix/Microsoft deal made it shift strategy a bit?

A deal to pipe the movies directly into Sony televisions is nice, but for this service to really work, more distribution deals will be needed. If Amazon were to say, extend its deal with Sony and allow Amazon Video on Demand on the Playstation 3, that would be a huge deal and would more directly pit Sony/Amazon against Microsoft/Netflix.

Perhaps Amazon could strike a deal with the Roku box as well which currently offers up Netflix streaming movies, but has said it is working on other partnerships.

A Roku box offering up Netflix free streaming titles (for Netflix subscribers), Amazon pay-per-view streaming titles and something like Hulu for new, free ad-supported television content, might be the ultimate dream box for the living room.

One important thing to note is that Disney and its network ABC are not on board for this venture with Amazon. Disney has a very close relationship with Apple, whose chief executive Steve Jobs is its largest shareholder and sits on its board. The new Amazon offering compete with iTunes movie rental service, as do the other services by Microsoft/Netflix and Sony announced this week.

How will Apple respond?

No pricing details have been announced for the Amazon Video on Demand service (update below), but it is expected to launch today to a limited number of customers.

Update: Pricing will be the same as the current Amazon Unbox model, according to ReadWriteWeb. Television episodes will be $1.99, with movies ranging from $7.99 to $14.99. Movie rentals will be $3.99. All of these prices are pretty much inline with Apple’s iTunes store.