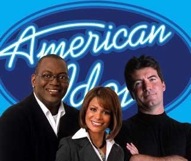 I’m fortunate to have a job where it’s beneficial to download and try out as many iPhone applications as possible. But with over 5,500 apps now available in the App Store, not even I can possibly download them all. I need some kind of filter — and usually, that is an app’s rating within the App Store. But depending on the app’s popularity, those ratings can be uneven. With the upcoming 2.2 iPhone software update, that may change.

A new screenshot taken by the blog iPhone Hellas of the second beta version of 2.2 currently circulating among developers shows a message that pops up prompting a user to rate an application. In the screenshot, it appears the user is attempting to delete the application and before that is completed, Apple requests the user give it a rating. If the user is deleting it, you can probably assume they are going to give it a negative rating, so it’ll be interesting to see if Apple plans to pop up this rating mechanism at any other time. Perhaps Apple may prompt you to vote after using the app for a set period of time if you don’t delete it, the gadget blog Gizmodo speculates. That seems like a pretty good idea. 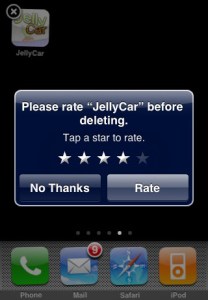 With all the apps I’ve downloaded I have yet to rate one. It’s never even crossed my mind to do it. But if I were prompted to after a certain amount of use on my phone, provided it were easy enough (as in one-click), I would definitely do it. I think others would as well.

This would make the ratings much more useful, and could propel some smaller apps forward into the spotlight.

This supposed iPhone software 2.2 feature follows news a few days ago of Google Street View and transit directions being added to the iPhone’s Google Maps application. There will also apparently be a way to share you current location with friends via email (which, as I wrote at the time, seems kind of pointless). And word last month had 2.2 bringing us a slightly updated version of the Safari web browser on the iPhone.

There is still no word if 2.2 will include the Push Notification System that Apple showed off at this year’s WWDC as a better way of using apps all the time without having them constantly running in the background.