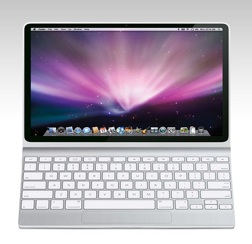 Apple rumors work like an avalanche — all it takes is a single one (that’s probably false), and soon we have massive rumors rumbling at us. Today brings one of the biggest rumors of all: A Mac netbook.

Specifically, Ezra Gottheil, an analyst with Technology Business Research Inc., says in Computerworld that the poor state of the economy alongside the rising sales of netbooks (very compact, cheap laptops) means that Apple will enter the market sometime in the first six months of 2009. Gottheil even gives a suggested retail price for this device: $599.

At an Apple event in October, Apple chief executive Steve Jobs said, “We don’t know how to make a $500 computer that’s not a piece of junk, and our DNA will not let us ship that.” So while $599 isn’t $500, it’s close enough, and that statement is recent enough that Jobs would seem kind of silly if Apple were to launch a netbook at that price right now.

Of course, Jobs has claimed that Apple wouldn’t do something (for example, enter the mobile phone market) that it then eventually did. And Jobs could always say something along the lines of Apple having cracked the code for a good netbook, so now it feels comfortable making one.

But there’s something even more interesting in Gottheil’s guess. He thinks that Apple would tie its netbook to the App Store, the distribution method Apple uses to get third-party software to the iPhone and iPod touch. While I definitely think Apple will start rolling out its App Store idea to other products, like the Apple TV eventually, a tie-in with the App Store on a device without a touch screen (which Gottheil doesn’t think the Apple netbook would have) doesn’t seem to make a whole lot of sense at this point.

Gottheil also names Google and Hewlett-Packard as potential software and peripheral partners for an Apple netbook — which again doesn’t make a whole lot of sense given the control Apple likes to have over its products.

In short, the whole prediction seems kind of silly. Could Apple launch a netbook? Sure, it makes some sense because such a device would indeed sell like mad in the current economic climate, where consumers aren’t looking to spend a minimum of $1,000 on a computer if they don’t have to. But as Jobs has indicated, unless Apple could nail it and make a great product, don’t expect them to do it.

To me, “nailing it” would include a built-in 3G connection and a touch screen, and the latter would likely make the netbook too expensive. Instead, look for rumors about a Mac Tablet that uses multi-touch technology to continue into next year.