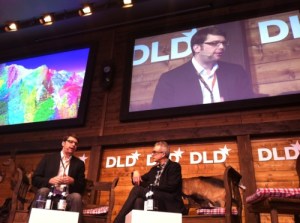 Mason fielded tough and rather unsympathetic questions from author and journalist David Kirkpatrick on Groupon’s business and the company’s sometimes head-scratching decisions.

Kirkpatrick asked about Mason’s perception of the criticism Groupon has fielded since filing its S1. “People went from overly cheerleadly … to everybody piling on,” Mason said, attacking the media for flopping from being far too favorable to now far too harsh. “We’re not a perfect company … the criticism was unfounded,” Mason said.

Kirkpatrick then peppered the CEO of the newly public company about the very replicable nature of Groupon’s daily deals model and his investors’ decision to take hundreds of millions of dollars off the table prior to the IPO.

Mason iterated that Kirkpatrick, and the public and press at large, don’t fully understand the barriers to entry. “It doesn’t matter that you don’t understand,” he brazenly said before diving into the reasons why people misunderstand the company’s business.

Mason admitted that thousands of companies have replicated Groupon’s model. Few have seen more than marginal success and large companies have pulled out of the space entirely, he argued, pointing to Yelp, Facebook and OpenTable as examples of those that have tried and failed at daily deals. “People don’t understand what makes Groupon great,” he said. “There’s a human component, core to our DNA, that’s difficult for a full-on technology company to bolt on … look at the evidence.”

On the topic of taking money off the table — Mason and early Groupon investors including Eric Lefkofsky and Bradley Keywell sold a chunk of their shares for nearly $1 billion while Groupon was still a private company — Mason strongly defended the controversial decision. If you have a startup, you should take money off the table if you can find sophisticated early investors, he argued. It alleviates the pressure of finding a short-term exit such as a sale to Google, he added.

“Everybody has their number that lets them sleep at night,” Mason said, adding that by cashing out, Groupon can continue on as an independent company. To drive the point home, Mason said that the public should continue to criticize the practice of taking money off the table if they want a world where every company sells to Google or Amazon.

“We had enormous interest from investors,” Mason said. “Getting those investments was a net benefit to Groupon … none of those people that we sold stock to are complaining.”

Throughout the discussion, Mason continued to stress the human component of the Groupon business. Groupon, he said, is a technology company with an important human core. He talked up the operations, sales and marketing side of the business as key factors that will support Groupon’s more tech-focused future, which will pivot around realtime local commerce.