updated with more details, plus screenshot

Federated is in a land-grab, trying to sign up publishers so that it can make money by serving advertising to them. FM gets the advertising, in turn, from large brands. By helping brands, FM clearly hopes to serve its publishers better. That’s the only way it can hope to keep publishers in its fold, which it is struggling — sometimes successfully, sometimes not — to do.

FM’s new service also helps advertisers tracks ad performance and reader engagement across the labyrinth of social media sites and other platforms that have become too arcane for even the largest brands to fully understand. [Update: It tracks standard metrics such as pageviews, and clickthroughs, but also attempts to measure brand metrics, such as “lift” and “buzz” and social metrics like “comments” and “tweets.”]

Social networks and other social web sites are steadily replacing television, radio and newspapers as forms of communication and entertainment. But few advertisers are comfortable buying ads beyond the traditional media they’re used to.

The toolbox, if effective, could make Federated a go-to place for social media advertising. It remains unclear however, what exactly it will measure. FM offered few details in its announcement. We’ll update once we hear back from the company.

FM did say it will collect and analyze internal data from companies and from third-party analytics services. It will be presented in a dashboard interface that lets an advertiser track how users interact with the ad. The data will also be made available through an application programming interface (API), so that other developers can build on it.

The Sausalito, Calif. company doesn’t like to call itself an ad network. It sees itself, instead, as a sort of representation firm for online content creators. It has taken some heat from bloggers — and investors — for having a model that doesn’t seem sustainable. The company has seem some of the sites it represents leave it for more profitable deals. (FM serves ads to VentureBeat and many other popular blogs). 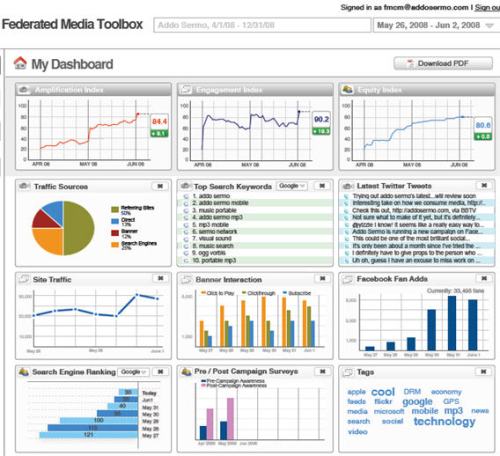