A new series of patents uncovered by AppleInsider, indicate that Apple is working on digital fitness system for use with its iPhone and iPod Touch devices. Such a system would include both an application and sensors to monitor your body during physical activity. This places Apple alongside Nintendo, makers of the Wii Fit game (popular in Japan and coming soon to America), as two major technology companies working on projects to promote a healthier lifestyle.

Apple’s system would work by first having a user fill out a computer-based questionnaire with pertinent vital statistics and fitness interests. Apple would then find some tailored exercise information for you based on your answers. This information could include things such as videos for specific workouts and applications to monitor your progress towards goals you set.

Using the touch screen on either the iPhone or iPod Touch, a user could go step-by-step through a workout with visual prompts letting them know how they were doing. Naturally there would be an option to play your favorite workout music throughout the entire session — this is an iPod after all.

This new system would seem to be an extension of Apple’s popular collaboration with shoemaker Nike on the iPod + Nike sport kit. That kit included a device that was placed in your shoe to monitor information such as distance and speed during a run. That information was then wirelessly sent to your iPod so you could see it in real time.

[Above: One of the patent sketches showing a potential fitness application on an Apple device.]

Nintendo’s fitness aspirations seems less serious by comparison, but the company has the same goal of promoting health consciousness. The video game company has developed a game for its Wii video game console called Wii Fit, which utilizes a component called the “Wii Balance Board” (a board on the ground that is connected to the Wii) to engage users in a series of physical activities.

Activities include yoga, jogging, pushups and step aerobics. Your statistics based on your exercise performance are sent back to the Wii where your data is tracked over time. The idea is that seeing progress in your physical activities while playing a “game” will encourage users to stay active. 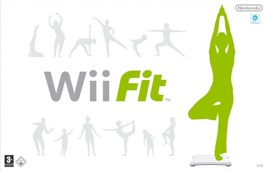 Traditionally, video games have been more of a senditary activity. The most popular games require little more than sitting on a couch and moving your thumbs or sitting at a computer and typing while moving a mouse. Nintendo has been trying to break this mold — first with its massively popular “brain exercise” franchise, Brain Age, and more recently with its latest console, the Nintendo Wii. The Wii uses a control system that emphasizes gesture-based movement to manipulate the action on a television screen. Wii Fit is an extension of this movement idea.

The game has already sold over a million copies in Japan since its release in December and it will be released in the North America on May 14.