100 million is an incredible number. That’s the number of application downloads through Apple’s App Store so far. What’s even more incredible is that it’s hit this number in just 60 days.

While some of the exact numbers such as paid versus free (I don’t think it’s a stretch to think that free apps have far outpaced paid ones, as you might expect) weren’t stated, 100 million is a number that simply can’t be ignored. It shows the App Store is a force to be reckoned with within the mobile industry, just as iTunes was within the music industry following its launch several years ago.

I think this high number also adds more weight to my thought that Apple will eventually move the App Store beyond the iPhone and iPod touch and make it available on many of its products, such as the Apple TV.

But there is one number that may be a slight concern to Apple. Apple chief executive Steve Jobs previously said that the App Store had moved 60 million apps in just one month. Now that we’re two months in and it’s at 100 million, this shows a slow down. Of course, that was probably to be expected given the hype and excitement the store had immediately after its launch. Now that people have settled down and perhaps aren’t just downloading any app they see, the numbers are slowing down.

Still, with iPhone and iPod touch sales likely to increase, don’t expect those numbers to sag too much.

Some other numbers: Jobs said that the App Store was available in 62 countries now. And that there are about 700 games in the App Store. Games were highlighted quite a bit during Apple’s “Let’s Rock” event today. Jobs also said that the iPhone may be the best portable device for playing games. That’s quite a statement when devices like the Nintendo DS and Sony PSP are out there and really only do one thing: Play games. 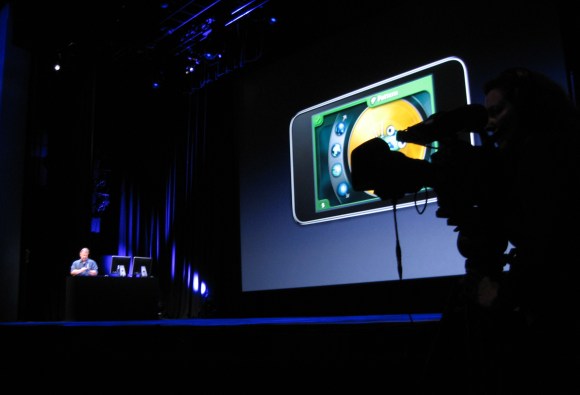