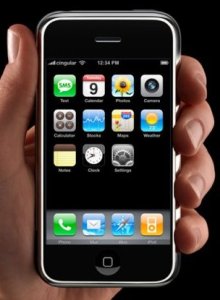 Apple reported fourth quarter earnings were above expectations today but its outlook for the first quarter of next year was mixed, giving investors the option to either boost the company’s battered stock price or to drive it down further.

The Cupertino, Calif.-based company predicted its first quarter would be hard to predict because of the economy. It offered a revenue range of $9 billion to $10 billion in the first quarter, with earnings per share ranging from $1.05 a share to $1.35 a share. That’s much more muted than the $10.57 billion consensus figure for revenue and $1.65 a share for earnings per share. (Those are GAAP-based numbers for the earnings guidance). During the call, analysts were treated to a rare appearance by Steve Jobs, chief executive of Apple, who touted the results as “stunning.” (See below).

The overall picture: Apple continues to gain market share in each of its major markets for the iPhone, iPod, and Macs.

Gross margin was 34.7 percent, up from 33.6 percent in the year-ago quarter. That means that Apple made slightly more money on each product it sold. That was better to better component pricing. The company anticipates 30 percent or so gross margins in 2009 but would not leave room for competitors to undercut Apple on price. International sales accounted for 41 percent of the quarter’s revenue.

Peter Oppenheimer, Apple’s chief financial officer, said visibility was limited and so the company was offering the wide range for the first quarter. Oppenheimer noted that the company reported non-GAAP numbers that adjust sales and product costs to eliminate the impact of subscription accounting, the corresponding non-GAAP measures for the quarter are $11.68 billion for adjusted sales and $2.44 billion for adjusted net income.

Oppenheimer said the iPhone had a “breakout” quarter, selling more of the second-generation phones in the quarter than it had previously in the life of the first iPhone. The iPhone is selling in 51 countries now and in the current that will expand to 70. There are now 30,000 distribution sites.

The Mac sales set a new record, but they were likely impacted by budgetary constraints at schools and anticipation of the new MacBook laptops introduced last week. The iPod sales set a record for a non-holiday quarter. The company said its share of the U.S. music player market was over 70 percent, according to NPD. And he said the iPod was gaining share overseas. There are 65 million registered iTunes users and 8.5 million titles. Apple opened 31 stores during the quarter, leaving it with 247 stores now.

Stores hosted 42.7 million visitors during the September quarter. That was record-breaking foot traffic. There are lower margins on the new iPods and notebook computers, hence the lower earnings guidance for the first quarter.

Jobs made a rare appearance on the conference call, adding his own panache to the financial results.

He said, “Some remarkable things are happening at Apple, but everything is set against this global economic slowdown.” He said the non-GAAP financial results, introduced for the first time, are a big deal because they eliminate the effects of subscription accounting. That spreads the impact of iPhone’s contribution to earnings over two years, making it harder for investors to evaluate the business. As long as iPhone business was small, this didn’t matter much, Jobs said. But now it’s huge. By eliminating subscription accounting, Jobs said the results, when looked at in a non-GAAP fashion, are “truly stunning.”

Jobs also said that it was a “milestone” that Apple beat RIM after just 15 months on the market with the iPhone. And now Apple is the third-largest mobile phone supplier as measured by revenues. Nokia is No. 1 while Samsung is No. 2. These are “amazing feats,” Jobs said.

The App Store has sold more than 200 million downloads since its launch in July. New applications continue to be developed at a rapid pace, Jobs said. He made no reference to the T-Mobile G1, the new cell phone built by HTC which uses the Google Android software.

As for the economy, Jobs said, “We are not economists….But we do know a few things.” He said Apple has the most loyal customers who are more likely to delay purchases, rather than switch to something else. He also noted Apple is gaining market share in mobile phones. He predicted the MacBooks would prompt a renewal of purchases among Apple’s current customers. Lastly, he noted Apple has $25 billion in the bank and no debt. In the last downturn, he said, Apple increased R&D spending. This time, he said, Apple will do so again.

In Q&A, Jobs said that October is always a “foggy month” for making forecasts. Asked if Apple would return cash to shareholders, Jobs said, “The economic downturn may present extraordinary opportunities to companiess that have cash. Cash is king. We are very comfortable with cash in bank and it is not burning a hole in our pocket.”

Jobs declined to say if Apple would use its cash to buy other companies. But he joked, “Hiring every engineer in Silicon Valley is a good idea, though.”

While some of the products, such as iPods, slowed down at the end of the quarter, it wasn’t clear what effect the slowdown would have overall. Apple had fairly lean inventories of Macs — about three to four weeks of supply. The iPod was more in the normal four to six weeks of inventory, while the iPhone was also in plentiful supply. It was, however, no more than six weeks of supply.

Jobs said Apple would continue to serve customers in the most attractive categories but would not “try to be all things to all people.” Asked about Apple TV, Jobs said “the whole category is still a hobby right now. Nobody has succeeded at it. The experimentation has slowed down….I continue to believe it will be a hobby in 2009.”

Jobs said the traditional game in phones was to produce a voice phone in 100 varieties. But as software becomes more important, Jobs said a 100 versions of the software is not enticing to developers. He noted that “Babe Ruth had only one home run. He just kept hitting it over and over again.”