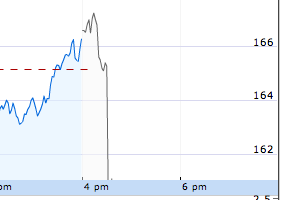 Apple easily beat estimates for its third quarter results today. It had the best June quarter for both revenue and earnings in the company’s history and the best quarter ever in terms of Mac shipments. Great news right?

Well, not from Wall Street’s perspective. The stock is tanking in after-hours trading. The reason? A weak outlook for the next quarter.

Right now the stock is down over 9 percent in after-hours trading (update: Now down over 10 percent), plunging towards the $150-a-share mark — a level it hasn’t been at since April.

If this seems familiar to you, it may be because it’s like deja vu all over again from Apple’s last earnings report. Apple blew away second quarter expectations in April and set guidance very low for the third quarter. Now it’s doing the same thing for the fourth quarter. I see a pattern, but apparently the rest of Wall Street doesn’t and is once again buying into Apple’s “set the bar low” game.

Apple is expecting fourth quarter earnings to be $1.00-a-share with revenue of $7.8 billion. Wall Street averages were looking for something more along the lines of $1.25-a-share and $8.3 billion in revenue.

Some other notes of interest from the call: