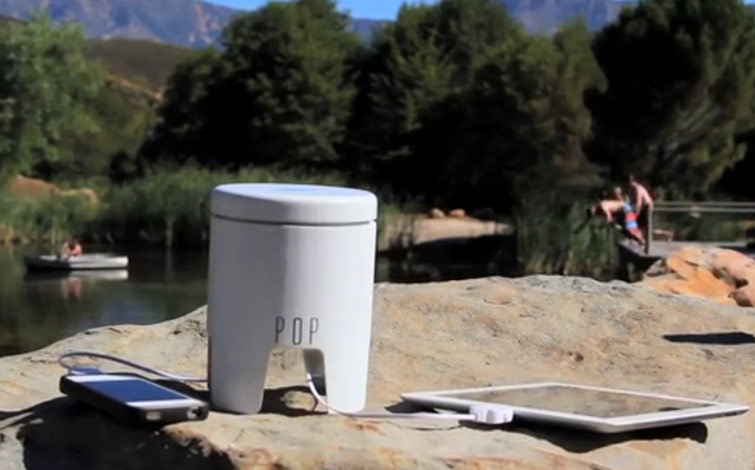 Edison Junior, the technology and design lab behind the POP portable power station, is returning the full $139,170 in funding it received from Kickstarter backers to develop the device. Unfortunately, Apple has refused to give the project permission to license the Lightning charger in a device that includes multiple charging options.

POP was billed as “the intersection between charging and design” and featured connectors to charge iPads, iPhones, and yes … Android devices. Its four retractable cord reels would have powered anything using micro-USB charging connectors.

That’s a problem with Apple. In fact, even combining Apple’s new Lighting connector with the old 30-pin connector in a charging device was verboten; Apple would not approve, forcing the team to abandon the project.

“We are pissed,” Edison Junior CEO Jamie Siminoff told me on the phone today. “I think they are being a bunch of assholes, and I think they’re hurting their customers.”

Apple finally speaks — here’s their side of the story

Another update (December 24) — the POP project is back on

“We would have loved to have made the product,” Siminoff told me. “At the same time I feel like we’re making the correct decision … I’m not willing to compromise on the product.”

The dispute has been ongoing since September, when Apple announced the Lightning connector.

“We didn’t get a yes or a no up front,” Siminoff said. “But as we kept going back and forth it was clear that it was getting harder. Then, when we saw that they weren’t even going to allow a Lightning connector and a 30-pin connector together, we knew it was over.”

He also said that, while Apple is a private company and can do whatever it wishes, it should watch out. “When you do things that are bad for the customer … I think it will be bad for them.”

Siminoff issued this letter to all project backers:

I’ll never forget the moment when our campaign passed the $50,000 goal and our dream of powering dying batteries became tangible. Our promise was simple: provide a portable charger that was capable of charging ALL of your devices including the anticipated iPhone 5, which at the time, had yet to be released.

When Apple officially announced the move to Lightning we determined the best course of action was to incorporate two Lightning chargers, and two 30-pins (along with the four micro-USB’s). After applying to Apple (which is now required for Lightning), we learned that they are no longer willing to approve a product that uses the Lightning charger alongside any other charger (including their own 30-pin — seriously). Just like that, POP could no longer fulfill its true promise.

As we struggled with Apple we realized that Kickstarter did not have a mechanism for refunding everyone their money. Since we are not willing to compromise and build a crappy product, refunding the money is the only acceptable thing to do.

This sparked the idea that crowdfunding of physical products needed a place that was built around the intricacies they present, so a few weeks ago we launched our own crowdfunding site, Christie Street. Built from the ground up around product, Christie Street is designed to handle needs that can arise from products — such as refunds — in order to prevent compromised products from being delivered.

In order to process your refunds efficiently we are going to set you all up with Christie Street accounts, and there, you will be able to process your refunds. Since payment processing has little to no room for error, we still have some final testing to do before we can send out the instructions, so the plan is set for mid-January. Conversely, had we manually sent out the refunds to all 1,000 backers the process would probably have gone longer.

Providing full refunds means we will have to absorb a hit for both credit card (3%) and Kickstarter fees (5%) totaling over $11,000. Today we asked Kickstarter for the 5% fee they collected based on the circumstances, however regardless of their decision YOU WILL RECEIVE 100% OF YOUR MONEY BACK.

We don’t believe in selling a substandard, compromised product that only satisfies the needs of a few backers, as that was not our promise. So we can’t thank you enough for your incredible support and awesome feedback – we hope to collaborate again with you soon. If you have any issues please email me directly.

All the best,
Jamie

P.S. If you know anyone at Apple please send them coal for their stockings, on behalf of us :)

I’ve asked both Apple and Kickstarter for a statement or comment on the matter. I’ll update this post as I hear more.

This is not necessarily the end of the Edison Junior’s portable power project. Siminoff told me that the team will be re-focusing on a device that supports Android phones, tablets, and Apple products, if backers wish to use a Lightning-to-USB connector, or an older 30-pin connector. They’ll only build that device, however, if the crowdfunding community wants it.

Which is why refunding everyone’s money — including credit card and Kickstarter fees — was the right thing to do to retain the community’s trust.