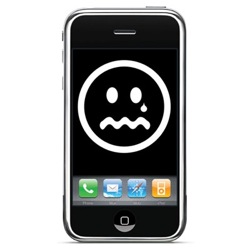 The fuss continues over Apple‘s capricious acceptance policy for its iPhone/iPod Touch App Store, most recently with the rejection of an app called Hottest Girls. But for me and a few other San Franciscans, there’s a much bigger cause of outrage — the disappearance of a public transit app called Routesy.

If you don’t live in San Francisco, you’ve probably never heard of Routesy, but it was the very first iPhone app I paid money for, and until recently it was the one I used most. Basically, it combined a slick interface with the iPhone’s GPS and the bus arrival times available at NextMuni.com. I could look up a bus line and direction, then Routesy would provide the arrival times at the stop nearest to me. (Google Maps provides public transit times, but it’s based on the official schedules, rather than real-time data extrapolated from the buses’ actual locations.)

Here’s the problem: A company called NextBus Information Systems claimed to own the data and wanted to take a chunk of Routesy’s revenue. Then it decided that the app wasn’t popular enough to be worth a deal, so it asked Apple to stop approving updates. Routesy-maker Steven Peterson says that when the app broke due to a change in the NextBus site, he submitted a fix to the App Store, but Apple turned it down, essentially killing Routesy. (The app has subsequently disappeared from the store.)

So, how can a private company own bus arrival times? Well, the answer gets pretty convoluted and is outlined in more detail at SF Appeal and SF Weekly, but it looks like NextBus has a contract with the city saying the company has the right to be “the sole agent for the commercial use of the NextBus real-time prediction data.” (The distinction here is that NextBus doesn’t own the arrival times per se, but rather the predictions generated by a specific technology.) At the same time, a Muni spokesperson told both the Appeal and the Weekly that the public agency owns the data.

The legal situation remains unclear, but either way, this is a crummy situation for any developers hoping to do something cool or useful with Muni data. In the correspondence that Peterson provided to the Appeal, NextBus says it’s not interested in striking a deal on an app with relatively few downloads and no recurring revenue, and it also says being a free app wouldn’t help either, since free apps are “commercial” in the sense that they improve the iPhone, which is a commercial product. So Routesy is gone, and a commenter at the Appeal says another app called MuniTime faced the same objections. (I’m hoping Google will also incorporate real-time schedules into Google Maps, but the search giant probably has the money to strike a deal if that turns out to be necessary.)

Luckily iMuni, the app I switched to when Routesy broke, is still available. Presumably that’s because it doesn’t pull NextMuni data, but rather provides a navigation system that eventually loads the NextMuni site. So Muni-riding iPhone users aren’t necessarily suffering, but that may be another blow for Peterson. Even if Routesy comes back to the iPhone (and Peterson says he’s looking at his legal options), many of his customers will have defected to a competitor.

I’ve emailed NextBus for comment and will update if I hear back.

First of all, iMuni, like iCommuteSF, worked with us to license the data for use.  So we have no problem with iMuni or any other app that is interested in using the data and is willing to license it from us.  We encourage this.  We contacted Routesy as well, after licensing to iCommuteSF and iMuni, in the hopes of licensing to Routesy under the exact same terms.  Routesy refused to talk to us as his position was essentially that we have no right to license the data.  We welcome application developers who are interested in using the data and simply require that they are willing to discuss and come to terms on licensing with us.  I have no interest in killing apps, I want to encourage apps that use the NextBus data and I encourage app developers to contact us.