To say that Apple’s iPhone is rapidly spreading around the world is now an understatement. Today comes word that Singapore Telecommunications (SingTel) and mobile partners are the latest to strike a deal with Apple to sell the device, according to Reuters. This will put the device in four new countries: Singapore, India, Australia and the Philippines.

This follows recent word of the device coming to Canada, the Czech Republic, Egypt, Greece, Italy, India, Portugal, New Zealand, South Africa and Turkey. Other countries such as Argentina, Brazil, Chile, Colombia, Dominican Republic, Ecuador, El Salvador, Guatemala, Honduras, Jamaica, Mexico, Nicaragua, Paraguay, Peru, Puerto Rico and Uruguay may be on board as well thanks to Apple inking a deal with America Movil.

While this deal still won’t bring the iPhone to the world’s most populous country, China, nabbing the number two, India, with its over 1.1 billion people isn’t too shabby. Bharti Airtel Ltd, the SingTel associate which will handle the service in India has access to just about 60 million users. By comparison, AT&T, the United States carrier, has access to just over 70 million, so this is potentially very big deal.

These countries will get the iPhone later this year. Presumably that will be the 3G version of the device which should be released shortly — though probably not as shortly as some presume.

The map below doesn’t include all of these latest additions but is an update of the one from the post on Friday. The artist has reworked it a bit as well so it’s easier to see (countries in red have, or are getting the iPhone) — and looks even more like the board game Risk. 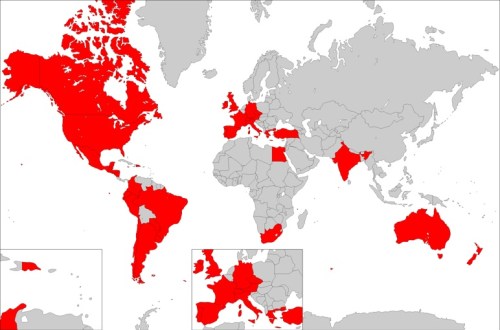